Raitis Ivanans is the resident role player (read: enforcer) for the Kings. Last season he played in 73 games getting 6 goals, 2 assists for 8 points, and ended with 134 penalty minutes. In the beginning of the season it was clear what Ivanans’ role was, but once the Kings drifted out of playoff contention, Marc Crawford started moving him around the roster more and more. This caused me frustrations at first, but when it was clear that the Kings were going nowhere, I really didn't mind Ivanans getting more ice time. But there were definitely instances where I would wonder why he decided to pick a fight when he did because the timing wouldn't quite work with what was going down in the game. I forget which game it was exactly, but he started fighting with a guy about five minutes into the first period. Really? Why?

I think he didn't play in all 82 games because of the Rob Blake slapshot he took to the face. It was unbelievable; the man didn't even fall down. His hands shot to his face and he skated over to the bench. I can't even imagine what that must has felt like. Not just a puck flying at your face, but with Rob Blake's power behind it. It frightens me to even think about. I can't pinpoint the exact game, but it was in November sometime and when he returned he had to wear a full face shield to protect his face while it healed. He now has 4 titanium plates in his cheek! What a man's man. 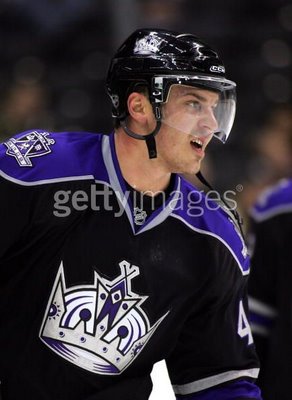 So it's no secret that he wasn’t the best skater, and yeah, he wasn’t the most skilled player, but I really thought he deserved more than 5 minutes of ice time per game. This slight frustration caused this post, but it wasn’t like I wanted him to get top line time. I just wanted him to get some more ice time in general. Later in the season when he started to find himself on the same shifts with Anze Kopitar and Dustin Brown, I was nervous because I didn’t think that Ivanans could keep up with the other two. But he showed that he could actually do more than participate in some fisticuffs, which was a relief. I mean, we couldn’t really complain at that point because we were in the cellar and he really wasn’t holding back Kopi and Brownie by being on their line. In the January Ivanans signed a two-year extension with the Kings, which I thought was a very good signing. He is hugely popular with the fans and we definitely need him in the lineup. Speaking of, this quote is from a recent interview with Daniel Carcillo of the Phoenix Coyotes and it definitely put a huge smile on my face.

"I fought Raitis Ivanans in L.A. even though I really didn't want to. I'd scored a nice goal and was kind of revved up and skating around being an idiot. Wayne told me, "If he comes out, I want you to come right off the ice." Sure enough, on my last shift, Ivanans came out looking for me. He's a pretty scary guy: 6-3, 263 and incredibly strong. But I didn't listen to Wayne because I thought it would be cowardly to back down. We traded punches, he hit me on the forehead and I went down. It was quick, but it was one of the worst beatings I've taken in hockey."

After the season ended, he traveled to Canada for the World Championships with some of his Kings teammates. He joined the Latvian team and did what he does best. Although in looking at the stats sheets, I thought he should have been given more ice time seeing as he was one of the few NHL players on the roster. But what do I know. Anyway, I'm glad he'll be back with the Kings for the next two season. I shall be looking forward to the many fights we'll be graced with in the future. 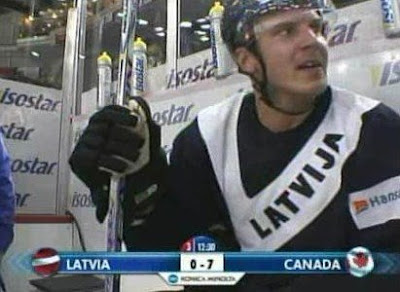 This was after he fought Ryan Getzlaf while playing Team Canada