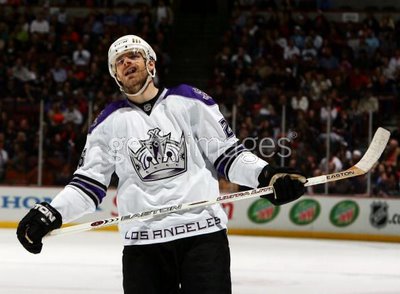 I feel the same way


Michal Handzus signed with the Kings last summer for four (4) years at $4 million per with a no-trade clause. Apparently he was brought in to be the 2nd line center but was never able to regain his form last season from the major surgery he had. He surprisingly played in all 82 games getting 7 goals and 14 assists for 21 points. He spent almost all of his time in the 3rd line center role, and I was never really impressed with anything that Handzus did. Apparently he's known for having "soft hands," but he also had a soft playing style. This was put to the test when Raitis Ivanans was out of the lineup due to injury and Chris Pronger decided to take a run at Handzus after the horn blew to end a game. This pissed me off for two reasons: (1) it’s obvious that Handzus isn’t one to throw down his gloves and (2) Ivanans was probably sitting in the press box punching walls wishing he was out there. This was just another instance that so bluntly illustrated to hockey fans that Pronger is a jackass. Even Dustin Byfuglien knew that he didn’t grab a fighter when he took hold of Lubomir Visnovsky. No punches were thrown in that instance because Byfuglien isn’t retarded.

The only really positive that I can take out of his being on the Kings last season was that by the middle-end of the season he was set in the 2nd unit of the PK with Patrick O’Sullivan. Although there definitely were times when I thought that both players were looking more for the shorthanded opportunity than trying to successfully kill the penalty. The thing that absolutely killed me about Handzus was that his faceoff numbers were horrible. HORRIBLE. I don’t even want to go back and look at any numbers, it was that bad. I don’t get it; wasn’t that something he was supposed to be good in? Bleh, anyway, we have him for 3 more years, so hopefully he can get back on the horse and figure out how to win some damn faceoffs. 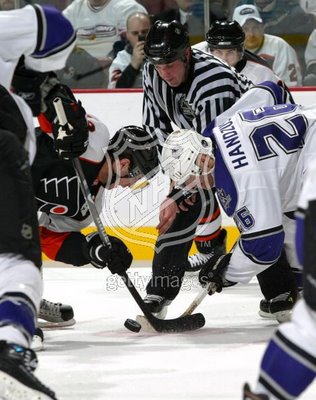 For the love of god, Handzus!

Moving onto someone I hearted last season: Jeff Giuliano started the season over in Manchester but eventually found a permanent place on the roster when the Kings were sucking (to be blunt). In Manchester he played in 23 games getting 3 goals and 1 assist for 4 points. With the Kings he played in 53 games while posting zero goals and 6 assists. He definitely provided a much-needed spark when he got to LA. He eventually found a place on the 1st PK unit and I was pretty happy about that. He seemed to genuinely want to kill off every single penalty he was out there for. He wasn’t afraid to dive headfirst into an oncoming shot. His spark led me to make this sign for him just to make sure he knew his efforts weren’t going unnoticed. 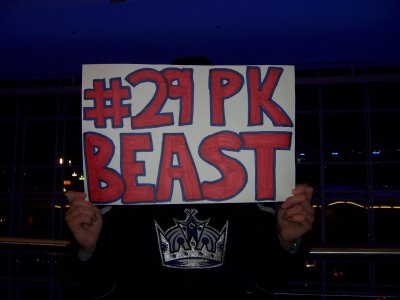 Bottom line, I realize that he wasn’t the best player, but I loved all that he did on the ice. He was a 4th line energy player and that’s exactly what he did. He played the shutdown role well and you won’t find too many complaints here. He even had a penalty shot against Miikka Kiprusoff. As a complete aside: there have been remarks all season about his appearance. Let me just say that I’ve seen him in street clothes sans the helmet and he’s definitely a good-looking fellow. The helmet does absolutely NOTHING for him. 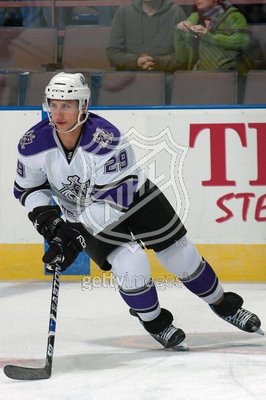 
Sadly, for me, he was not re-upped for next season by the Kings so he signed a one-year deal with HC Dinamo Minsk in Belarus for the 08-09 season. I was bummed when Ron Hextall said that he was not a priority to being re-signed, but I have accepted that fact now. I have no clue who’s going to replace him because after the top two lines for next season, it gets kind of hazy as to who could play in those positions.