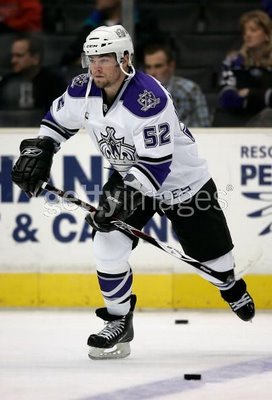 Get ready for a short one. There were a number of call ups from Manchester last season. There were those that made an impact and those that didn't. Gabe Gauthier was one of those that could be put in the latter group. He really didn’t do much while wearing a Kings jersey, which was evidenced by his playing in only 3 games with no points to show for it. This was actually in stark contrast to what he did while donning a Monarchs jersey. In 61 games he notched 23 goals and 37 assists for 60 points. He actually ended at a -13. Hmm... well, he only played in 3 of the 4 playoff games and ended at a -6 with nothing to show for it. Surprisingly, for me, he went to the AHL All-Stars skills competition where he participated in the accuracy shot. He did well by going 4 for 6. In the actual All-Star game he had zero points but ended at a +3. While it’s always cool to hear that a Southern California boy has made it into the upper leagues of hockey, I need to be impressed by the play that got him where he is. Seeing Gauthier’s short stint with the Kings didn’t do anything for me. Then again, he did poorly when the Kings were doing horrendously. Story of the whole season.

He recently re-signed with the Kings for two years, which assures a veteran presence on an increasingly youthful Manchester squad. I guess I have no complaints about this since it’s clear what his role will be for those two years.