At the beginning of the season Alexander Frolov was out of the lineup for a bit due to the ongoing injuries to his groin(s). (I’m surprised I never got a call to be his personal masseuse.) When he actually made it back into the lineup on a consistent basis, he obviously wasn’t one hundred percent in terms of his health. There was this certain tentativeness that he carried with him while he was on the ice and I saw him as being extremely delicate, which caused me mass amounts of nervousness whenever he had the puck. I felt like one harsh push or awkward check could have sent him back to the press box for a couple of games. But slowly and surely with each passing game, he became stronger and stronger on the puck until there basically wasn’t anyone on any team that could get him off of it. In the later stages of the pathetic season, whenever he got the puck he would just stickhandle like crazy and making the player who was covering him look like a little kid. I remember there’d be times where I’d just be sitting there shaking my head at how strong Fro was along the boards and in the corners. When I think of puck protection, Fro was definitely the player to watch on the team.

He played in 71 games getting 23 goals and 44 assists for 67 points. Amazingly enough, he was one of the few players who ended up in the positive side of the +/- column at a +2. I really think he flew under the radar to other teams because he wasn’t on the top line with Dustin Brown and Anze Kopitar. But in the meantime, he was busy racking up his own points. I thought his assists definitely rivaled both Brownie and Kopi’s in terms of their consistency and reliability. 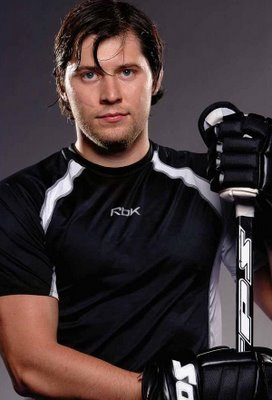 
His body type is very similar to Brownie and Kopi, but he just doesn't have the offensive flair of Kopi or the physical presence of Brownie. What he does have is the ability to make an opposing player look foolish. I think if I was defending against him, I’d just start verbally making cracks about his momma because there’d be NO WAY I could strip the puck from him.

Now that I’ve adequately stroked his… ego, I’ll say that he could have afforded to be a tad selfish. When the Kings would be set up in the offensive zone, more often than not he was more apt to pass than to take the shot. It was so frustrating to watch the constant movement of the puck; if one of them could explain to me why they’d rather pass 217 times before taking a shot, I’d really like to know. Call me! 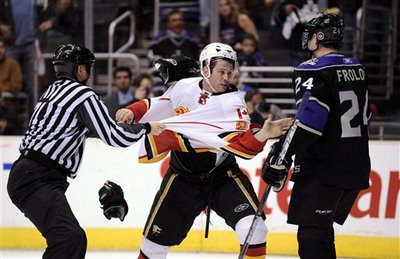 Even though he put up a good number of points, I don’t think he peaked in anyway last season in terms of individual performance. If he can stay healthy for all of next season, he could definitely give Brownie and Kopi and run for their money in the points department. Will next season be his "breakout" season? I honestly don’t think we need him to necessarily have an amazing season; he just needs to maintain his consistency and every season will be better than the next. We have him signed for a few more years, so he’s not going anywhere any time soon. And really, for how much he produces, we’re paying him pennies.