So if you haven't noticed, I've gotten really tired of these reviews. I'll finish them (I think), but I can't promise the quality of them to be great. I'm basically hanging on for dear life until the next season starts.... 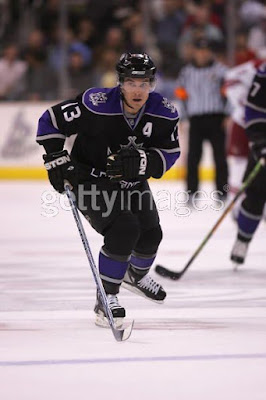 Michael Cammalleri’s 07-08 season started with his session in arbitration as opposed to his first goal of the season, which was the first goal that was scored in the NHL in 07-08. There was such promise for Cammy to have the same output last season like the season prior that when it didn't happen, he was viewed as a disappointment. Unfair? You can judge him how you wish. In 63 games he got 19 goals and 28 assists for 47 points. Not a terrible output seeing as he was even out of the lineup with various injuries. At the beginning of the season, I saw the Dustin Brown, Anze Kopitar, and Cammy line as completely dominant and one that wouldn’t last. That line created a roster that was completely top heavy because Alexander Frolov was still injured and Patrick O’Sullivan hadn’t yet started his breakout season. So Cammy constantly found himself on either the top line or 2nd line. Neither was consistent, which is hardly shocking, and he never seemed to get in a groove. I won’t discount that he started out the season strong; he had 10 goals in the first 10 games, but after that, his production definitely trailed off.

I’ll give him props for coming to the defense of Kopi when other players were taking runs at him. But it just took that one instance where he came away with a rib injury that put him out for a significant amount of games. Once this happened there was a collective groan from Kings fans because the secondary scoring was going to become even more invisible. But in came Sully to save the day. With his rise in terms of personal growth and point production, Cammy sadly became somewhat expendable. He spent the rest of the season being invisible, which didn’t help in the constant speculation of his movement within the next season sometime. 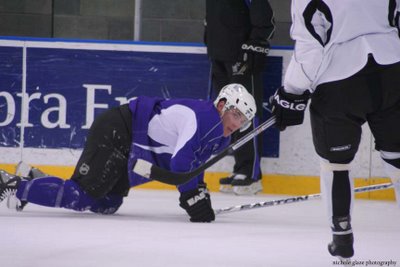 He likes it down there


Cammy survived the frenzy of the trade deadline last season, which was a bit understandable because his trade value wasn't as high as it could have been. I figured he'd be sent on his way at the next trade deadline after he had shown he was still a player of worth by trade day 2009. Of course, I was incorrect in my feeble guess because once draft day hit Kings fans breathed a sigh of relief. I guess I shouldn't generalize because not every fan wanted him gone. I guess it was a bit of the mob mentality in terms of how Cammy was viewed. I wasn't sure he'd be good trade bait for the draft, so I was surprised when it happened. He was sent off to the Calgary Flames along with the Kings 48th pick. This gave us Calgary's 17th pick, which was sent to the Anaheim Ducks with our 28th pick. We got back from Anaheim their 12th pick which was in addition to Calgary's 2nd round pick in 2009. Can you say A+ for Dean Lombardi? With all this movement and another eventual move, the Kings picked up Colten Teubert who is as mean and nasty a defenseman as you can get.

I'm not sure how he'll do in Calgary, but I'm sure if he finds himself playing with Jerome Iginla, he'll definitely pot some goals against us. Maybe Elisha Cuthbert will grow tired of Dion Phaneuf and go for Cammy. Whatev. All's I know is that Cammy's departure opens up a spot on the second line for Teddy Purcell, which makes me smile.