It was pointed out to me by a faithful reader, Brad, that I had not done a review for Matt Ellis. My sincere apologies since the reverse alphabetical order for the forwards is now messed up. In any case, here's another short one for you! 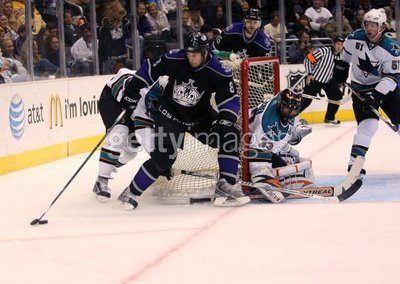 Look at that little ball of energy!


Ellis was the only player who started his year with a completely different organization while finishing up in LA. The Kings claimed Ellis off of waivers in the latter part of the season when the Detroit Red Wings tried to sneak him back to their AHL affiliate to help them in their run for the playoffs. He played in 35 games in Detroit getting 2 goal and 4 assists for 6 points. When he hit the waiver wire, the Kings quickly grabbed him up and, voila, we got an NHL-ready player without giving anything up! Sorry, Steph!

He proved to be an immediate change in the lower lines while even finding some time with Anze Kopitar and Dustin Brown. It was my belief that when a player found himself on a line with Kopi and Brownie it was a sort of audition to see if he could produce with the top studs of the team. (Notables who were not a regular part of the top 6 were Ellis, Raitis Ivanans, and Scott Thornton.) Ellis played in 19 games with the Kings getting 1 shorthanded goal and 1 assist. He definitely didn’t take anything away from the Kings by being in the lineup. His contributions were exactly what were predicted, to do what he was doing with Detroit/Grand Rapids. We knew he wasn’t going to come in and be an offensive juggernaut, so he was a nice addition to the team.


We have Ellis for another year at only $470,000, which I think is a bargain. I’m sure he’ll once again bring back what we picked him up for, energy and spunk for the bottom lines. He’s gonna have to pick up some slack though since Jeff Giuliano was not re-signed by the Kings, which really made me sad. My PK Beast will be in Belarus next season playing for the HC Dinamo Minsk, so hopefully Ellis can be an adequate replacement, which I’m sure he will be.