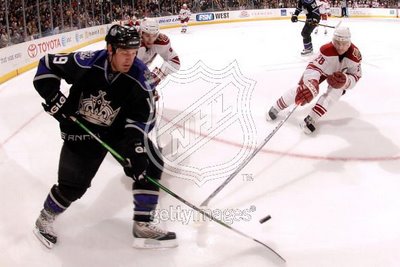 I’m not exactly sure what happened to Kyle Calder last season. He started out the season with a regular place in the lineup, but, by the end, he was a constant healthy scratch. He played in a total of 65 games getting 7 goals and 13 assists for 20 points. I'm not 100% positive about this, but I'm pretty sure that those games were front loaded on the schedule. When I first heard his name I thought, "Oh, he played in Detroit. He has to be good, right?" Yeah, that was a misconception on my part seeing as how he wasn't anything special whenever he hit the ice in a Kings jersey.

There are only two things that pop into my head when I think about him:

1) He had broken his thumb in November, which initiated the call up of my favorite, Matt Moulson. I was completely okay with this because Moulson's presence was much more noticeable than Calder's. I mean, Moulson put up points!

2) There was one game where my friend, AJ, and I were standing at the glass during the warmup, and who was staring at her every single time he skated by? That's right, Kyle Calder. Dude could not have made it any more obvious that he was staring at her, which provided me endless laughter and much embarrassment for her. And then he was scratched for the game, which made me laugh even more.

It's the summer and you may be thinking, "Where did he go? Seriously. Is he still even in LA?" The answer is: yes, Calder is still in LA and doing summer training at the moment. He will be in a Kings jersey next season with $2.8 million going his way. After that, he'll be a UFA in which, I'm sure, the Kings will let him test the free agent pool. Until then, I foresee Calder doing bottom line duty while being scratched at times. I'm really not expecting too much from him next season, which may provide me with some surprises if he does do well. But, really, I'm not holding my breath.