I think Dustin Brown has been my favorite from this past season. He completely encompasses what I believe a "power forward" to be. He's tall with a good weight to him, and he has some fantastic skill with the puck. He led the league in hits by a mile and was one of the highest point-getters on the team. He played in 78 games getting 33 goals and 27 assists for 60 points. Not quite a point-per-game player, but I have the utmost confidence that he'll soon get there without a problem. 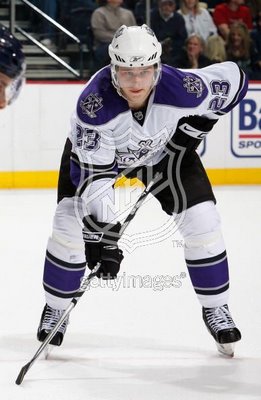 
If I were a center, I’d want Brownie on my wing every time. I thought he was such a good partner for Anze Kopitar; he ran the boards on his side and dominated the opposition both in skill and size. He never hesitated to hit a player if it meant that his teammates would regain possession of the puck. He also never hesitated to hit a player if it was available to take. This was made most apparent by the fact that he led the NHL in hits at the season’s end with 311 with the next closest being Mike Komisarik with 266. Just as an aside, I really think that Brownie had more hits during the course of the season, but I'm just picking nits at this point. Anyway, for someone who put down players in every game he amazingly had only 55 PIMs. Along with Alexander Frolov, I thought Brownie flew under the radar a bit in terms of how other teams viewed both of them. With Kopi's zombie-like eyes taking the attention of the other teams, Brownie seemed to be free to make the plays and dish out the hits as he so chose. Granted the majority of playmaking was Kopi’s doing, Brownie definitely held his own out on the ice.

For me, he seemed to explode out of the gate from the very first game of the season. But I can even back up a bit and remember him at the Frozen Fury in Vegas last September. He was in that shootout and in every subsequent shootout thereafter. He ended up missing a few games during the season and I remember at least two of those games were during the Kings' 8-game roadtrip out into the eastern conference so that he could be back in LA for the birth of his new baby, Jake.

While looking through my old posts, I found one I wrote awhile back when I saw the monstrosity the Kings rolled out with regarding a certain figurine set. And when I say "wrote," I really mean that I just posted the video. I was so speechless by it at the time, and, when I see it now, I realized that I had forgotten just how embarrassed I was by it. I can't even watch it again, but I will link it for anyone that wants to experience said embarrassment. Talk about painful.

After the dismal season closed, he was one of the Kings who went onto the IIHF World Championships where he made quite a showing, that is, if you were following the USA team. Team Canada sort of overshadowed the whole tournament in that it was IN Canada and then it had an all-star cast to go with it. Brownie was second to only one other American player on his team, Zach Parise. In my opinion, Brownie eclipses Parise both on the ice and in the cuteness factor. Brownie nearly led all the American players in ice time and in points production during the tournament, which really wasn't a surprise for me. I knew he was a good player, and he was just proving that again on a different stage. 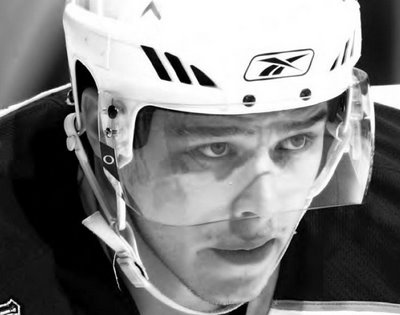 Brownie will again be on the top line with Kopi next season; of that, I'm positive. Who their left wing will be is anyone's guess. I really can't see anyone taking that right wing position away from our boy Brown. I'm not trying to stroke his sac or anything; I'm just stating a cold, hard fact. The 08-09 season is the start of his brand-new, bargain-basement 5-year contract. For next season, he will make...

...$2.6 million. That's correct, for the low, low price of $2.6 million, you could have a fucking stud on your top line putting up points. He had signed this deal early last season and I wondered if he was thinking that he should have asked for more. My initial thinking was yes, but when you think about what he had done prior to the 07-08 season and given his age, I think $2.6 was reasonable. That being said, if he had waited as long as Patrick O'Sullivan had/has/ugh, then Brownie would have gotten MUCH MORE. There's no question about that. Add that to the fact that he had recently gotten married and brought a beautiful baby boy into the world. Considering that kind of security he wanted and with his potential still untapped, it was a good signing.

I'm definitely getting his name and number on my new jersey. I'm super excited for it.