I am back in lovely So Cal, and I can't be happier. This isn't to say that the Frozen Fury game wasn't absolutely incredible; no, Vegas was just hot as hell and I'm over walking to destinations that are too far away.

I think having a game held in Vegas is an incredibly unique experience. Other preseason games have been held all over North America and Europe, but I'd be shocked if they could match the energy levels that occupy the bowels of the MGM Grand. The whole setting and experience is so unique that you can’t help but be completely enthralled by the sheer number of psychotic drunks roaming the casino floor and the along the walkway to the arena. Vegas does to a person what no other preseason game can do, which is basically to think it’s okay to do anything you want except run around completely naked. The thought of complete freedom is too overwhelming for some, but for the sane of us, we can do nothing but laugh and high five those lunatics. Bottom line: as long as those lunatics are wearing Kings jerseys, I’m safe.

On Friday evening, my friends and I happened to come upon the Luc Robitaille Poker Tournament, which he holds every year before Saturday’s game. We saw many tables filled with Kings, Aves, and civilians. The most notable were Anze Kopitar, Dustin Brown, Ian Laperriere and (of course) Luc Robitaille. But the highlight of that experience was getting a picture taken with Tony Granato. He was so nice and even gave the camera a genuine smile. After dinner, my friends and I made our way back to the tables to check out who was still around, but I only saw Robitaille among the players who were all from the Aves. I concluded that this meant that the Kings just weren't very good at poker. Anyway, I wished I knew the Aves by face because it would have been prime to get some photo ops, but I got over that quickly. 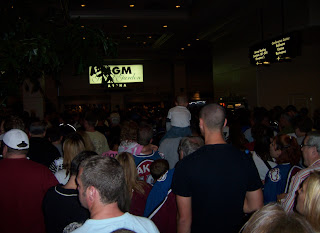 Walking into the arena 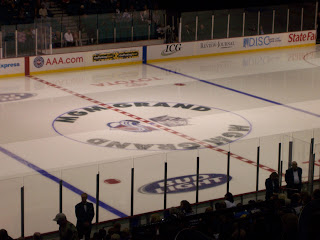 Eagerly anticipating the start of the game 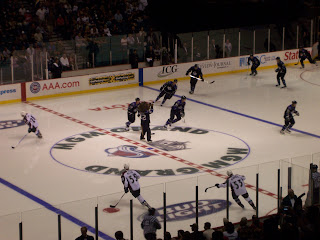 Bailey gearing up the arena while the boys hit the ice 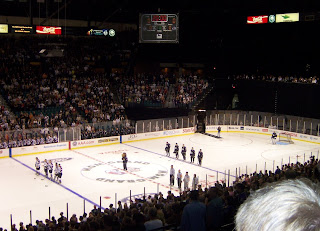 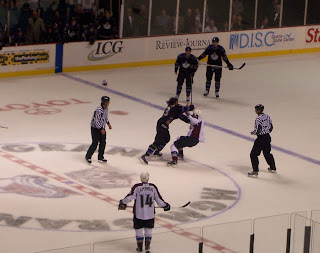 The first period of the game held the same fate as the first preseason game; there were 3 fights and 4 total goals scored. But instead of the Kings being up 3-1 like in the first game, the teams both notched two goals. The first goal of the game was scored by Matt Moulson on a pass of perfection by Kopi.

Vladimir Dravecky had the sweetest set up in front of the net. I seem to have completely forgotten who fed him the pass, but all he had to do was push it past Andrew Raycroft to get the Kings up on the scoreboard. Just like in first preseason game, the two goals Jason Labarbera gave up were both shortside and over the glove. They happened so fast that I couldn’t tell if he was out of position or if he just didn’t get his glove up in time. It should be noted that there is no jumbo tron in that arena, so if you missed something, you weren’t going to have the luxury of an instant replay. All I remember is experiencing the sickening drop of my stomach when I saw the puck sneak over Barbs’ shoulder… twice.

It felt like the Aves dominated more of the neutral zone during the first half of the game. The Kings struggled to get going out of their zone whenever the Aves were forechecking; that, combined with the fact that one of the defensive pairings was Drew Doughty and Thomas Hickey. I was definitely waiting for that one defensive breakdown to result in a goal against, but the two kids held their own and eventually were able to get their passes to stick a bit better out of the zone. This doesn’t detract from the fact that all of the Kings passes seemed to bounce over sticks and such that it was a bit embarrassing. These lapses wasted time, but the Kings finally figured out how to take over the neutral zone halfway through the game so that more time was spent in the offensive zone. 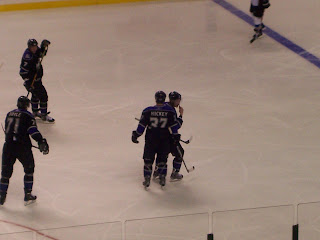 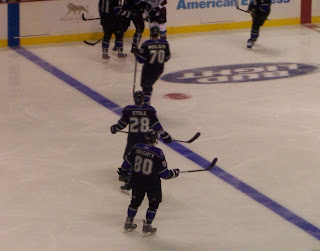 Last year at Frozen Fury X was when the Kings unveiled Bailey. The backstory is that he was a lion from the MGM Grand who the Kings were going to essentially adopt, so this year Bailey was basically returning to his place of birth. I thought it would have been cute for the Kings to do something concerning that for the kiddies, drunks, and new fans in the crowd. Instead, they unveiled Air Bailey, which was the funniest thing I’ve seen in recent months. Whoever was the nutjob in the suit milked the crowd and ice time for all it was worth. One hilarious moment was during the 2nd intermission. Watch him here and in this little clip I took.

The third period started with Erik Ersberg in relief for Barbs. It was nice seeing him out on the ice again even though he DID let in one goal. But Kopi gave us hope when he netted the type of goal that would make even the men in the crowd throw their boxers on the ice. It was a sick wrister from the slot area through a touch of traffic. It went top shelf over Raycroft’s right shoulder, far side, and the arena went absolutely bonkers. There were definitely two goals during the game that should have been Kings goals, but they were disallowed much to the utter disgust of all the drunken fans in the crowd. In my biased yet objective opinion, if the refs did what they were supposed to do, the Kings wouldn’t have lost in the shootout; alas, the Aves tied it up and we headed into overtime. The OT frame passed with just a few stressful moments and the shootout arrived, whereupon, Marie and I predicted the shooters to be Kopi, Brownie, and Moulson. The last Frozen Fury shootout saw the top two and Michael Cammalleri. I figured this time around to be similar, but Terry Murray had a different idea. He went with Oscar Moller, Jarret Stoll, and Derek Armstrong. Okay, I understand Moller, but I was very hesitant on Stoll being out there. I was even MORE hesitant on seeing Army grab up the last spot. I knew he wasn’t going to score and I’m wondering why he was given the opportunity. If anything, it should have gone to another young kid, but I guess it’s better to give Army a chance now since he’s not going to be in the shootout during the regular season. So the Kings lost with the only goal of the shootout coming from TJ Hensick against Ersberg.

The walk out of the arena was a sobering experience, but it was nothing to cry over seeing as how we were still in Vegas. All-in-all, I thought the Kings organization and players did a great job with yet another stint in Vegas.