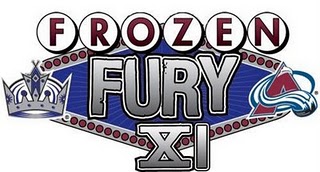 Here we are. Frozen Fury XI is on our doorstep and I can't even believe it!! When I bought the tickets in the early part of summer, the event seemed like it'd take forever and a year to arrive. But now that it's here... I'm not looking forward to the drive.

So far the Kings have not lost a preseason game, which I'm hoping is the case after this weekend ends. I'm not sure what the lineup will be for Saturday's game, but here is what they were for the game against Colorado on Wednesday.

At the TSC yesterday I was able to see this top line run drills, and I'm pretty confident in saying that if Alexander Frolov were out for the start of the season (which he looks to be), I would not mind Matt Moulson hanging out with the top pairing. I'm very curious about how Michal Handzus and Derek Armstrong handled being on the 2nd line, which is how I feel about that 3rd line as well. That is such a mish-mash of players with Wayne Simmonds as the only Junior player, Jarret Stoll as the 20-something faceoff dude, and Brad Richardson... yeah, no idea. The 4th line is not wholly unfamiliar to me. This could very possibly be the 4th line during the season. But guys like Matt Ellis and (ugh) John Zeiler will try and work their ways onto the roster.

I'm pretty positive that this will not be the lineup for Saturday. I'm just way too jazzed (does anyone still say that?) about the entire weekend that I'm not too worried at this point. Since I won't have internet access in Vegas, I won't know much until the puck drops, which also means I won't be providing periodic updates. Instead, look for a long post with pictures galore (hopefully) upon my return.

Let's commence with the madness!!! 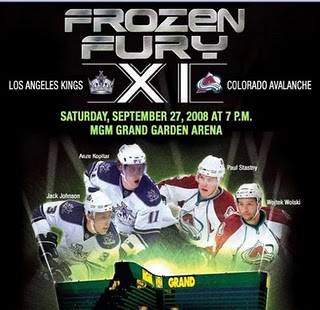