Brian Boyle was one of three Manchester boys who made a showing in his limited time with the Kings. He stands 6’7" and will be a force to reckon with once he plays a full year with the Kings, which will definitely be next season. While in Manchester he played in 70 games getting 31 goals and 31 assists for 62 points. While up with the Kings he played in 8 total games getting 4 goals and 1 assist, and he also ended at a +4. Similarly to Matt Moulson and Teddy Purcell, his NHL debut was on the road, which caused his debut at Staples to be one to look forward to. I was definitely standing at the glass with Marie for that game, and when we saw Boyle in that dark jersey, the first thought in my head was, "Oh my god, Boyle’s HUGE!!!" He didn’t disappoint by scoring a goal in that game. 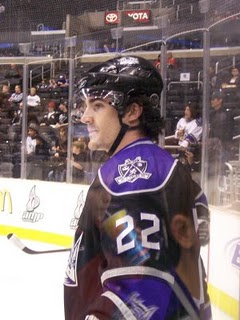 My height when I'm standing on a platform? Nice.


One of the many things that stands out during his time in LA is during one PK situation Marc Crawford sent him out just to take the faceoff. That was it; all he had to do was win the faceoff and then get back on the bench, which he did successfully. That small occurrence of finding out that a specialty of Boyle was winning faceoffs put a smile on my face and a reassurance in my mind that we'd have someone next season who the coach could go to with confidence.

After his all-too-short stint with the kings, he was sent back to the Monarchs to continue his studly season. One issue that had been repeated in different Kings' circles was that even though he was extremely large in stature he was a little soft on the ice. This is attributable to the fact that fighting is not permitted in NCAA play so that Boyle was not able to hone that skill even though his size could have easily allowed for the pounding of any opposition. I don't want him to become a jackass, not at all. Rather, he just needs to learn how to carry that air about him that deters opposing players from taking any liberties with him. This is also not to say that fighting should be his role, that's far from my thinking. I'd like him to continue learning in his center position and be an effective player on the bottom lines so that in the 09-10 season or beyond he can maybe set up shop on the 2nd line. 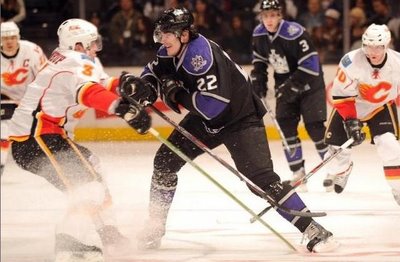 Look how wee Phaneuf is!