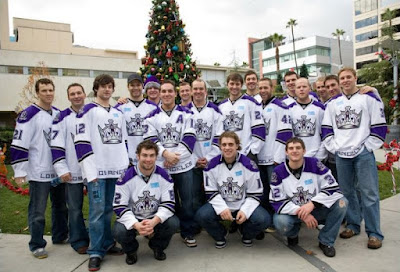 God, I love those jerseys


Here we are on the last player review, thank god! I hope everyone has enjoyed them because they took me awhile to do. I’m pretty sure (like 99%) that I won’t be doing a series of this depth next summer, but I’m glad I took on the challenge this first time around. If anything, I might tackle the reviews in a more sweeping fashion instead of individually. But that’s many months in the future, so we shall see what my mood is like then. If you’re still reading these, you deserve some kudos for sticking with me as I trudged through the entire roster. Even though I DID miss one or two players, I believe I can give myself a nice pat on the butt for sticking with this plan. It definitely made the summer move along at a faster clip than I thought. 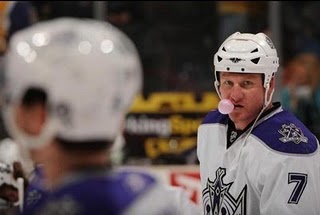 
On to Derek Armstrong. On the ice he was essentially a filler; he was the second line center eventually in on a permanent basis because Michal Handzus was unable to play in that projected position. Off the ice Army was one of the most approachable players on the team. At the end of the season he received an award for his community service efforts as voted on by the media. I believe that’s a testament to his character, which definitely gave him some exposure off the ice. On the ice was a bit different; he played in 77 games and had 8 goals and 27 assists for 35 total points. After a couple of months of tallying virtually no points, I stopped looking toward him for that type of contribution even though he was part of the top 6 forwards. I wasn’t too concerned about that since there were plenty of players who were helping to put the puck in the net. And really, it’s the Kings; what were you expecting? I think I even remember the game where he scored his first goal of the season. Was it one of the games in Colorado? I think it was, but I’m not going to go back and find out. Just take my word for it.

Even though he lacked an official leadership role, I saw his various actions after whistles as showing good leadership for the young players. Next season he will be one of the few remaining veterans on the roster and I definitely wouldn’t be surprised to see him wearing one of the "A's." I’m not saying that he will; I’m just saying that I wouldn’t be surprised. He has one more year left on his contract where he will make $1.6 million and then will become a UFA at season's end. Most likely he'll be sent on his merry way to search for greener pastures since he'll basically be ancient at 36 years of age (at the end of the season) when compared to the rest of the baby-faced roster.

I have nothing more to say. I’m going outside.