Share All sharing options for: I Think I Have An Ulcer: Red Wings 4, Kings 3 (SO)

Whenever the Kings play the Detroit Red Wings, there is always a feeling of dread that accompanies that thought. But, first off, I must say how glad I am to have watched this gave live instead of at home on the Rinkside View, which is horrific! In my very quick (a.k.a. lazy) search, I couldn't find any Rinkside View images. It's just as well; it's horrible and should be stricken from the record.

Getting to the actual game, the closer it got to the puck drop, the more worried I was getting. We were facing the Cup champs who had added Marian Hossa, you know, just as an addendum. My thought at the first faceoff? "Wow, let me go pee my pants actually." I think the most surprising move that Detroit made was putting Chris Osgood in net instead of Ty Conklin. First off, I'm always surprised when teams put their number one against my team; and secondly, I really wanted to see Conks play. I've seen Osgood play my team enough times; put in Conks next time! 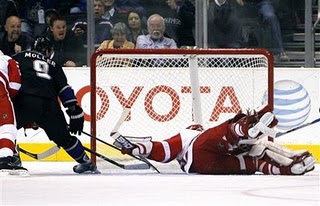 Yes, Moller is the real deal


Even though there was a concerted effort from the Kings, the top guns were definitely not performing at their top speed. Anze Kopitar has been lacking in the points production and creativity. Dustin Brown had 23:05 of TOI, 6 hits, no points, but was a +1. Patrick O'Sullivan had 18:39 of TOI but was pretty quiet as well. My offensive guns were lagging a bit in this game, but I'm so happy that we have enough depth to where this isn't a problem in the early goings. At the same time, I could only imagine how much better everything could be if all of our lines are rolling together consistently.

In looking at the other lines, I'm not sure which line had more punch, the 2nd or 3rd. I'm going to argue that it was the 3rd line in that all three players were working their tails off whereas one third of the 2nd line was a bit invisible. As much as I love Alexander Frolov on the 3rd line and what he's doing, I'm sad at the same time. He's not really scoring at his regular clip and his offensive opportunities have been severely limited. I'm not surprised; it's just a bit hard to see him in a role change since I know he has the capability to put numbers up. That being said, he did score on Osgood, which I was extremely happy about. Question: What if Terry Murray tried Fro up on the top line with Kyle Calder/Matt Moulson on the left wing of the 3rd line? Worth a shot?

Jarett Stoll ended the night with a -1 but his contributions were shown elsewhere. He was 75% in the faceoff circle winning 15 and losing only 5. He was definitely fighting hard for every single faceoff he took, which was very nice to see; not that I'm saying he takes draws off sometimes. It's just that it's Detroit and there is a very, very large microscope on every single Red Wings game. When I watched the NHL Network's highlights after I returned to my humble abode, I thought they spent an ungodly amount of time reviewing this game. But then I remembered that it was because they were playing the Red Wings. Would they have spent that much time on the Kings if they were playing, say, the Florida Panthers? I think not.

Another player who had a great game was actually Kyle Quincey, our waiver wire acquisition from the Red Wings. He was playing a physical and intelligent game, and everything he was doing looked great. There's no one play I can thing of right now, but he just had a solid outing and I'm very happy with him. Speaking of, I'm also very happy with Sean O'Donnell. He's only done good things out there since he's joined the Kings. When I find myself surprised that he's still a physical player, I just remind myself that he used to play for the wretched Ducks. Getting back to the happy, I was super happy to see Brad Stuart again. B-Stu! Someone in my section yelled out that he sucked and I looked at KingsCast and said, "Actually... he doesn't..." *pout pout pout* 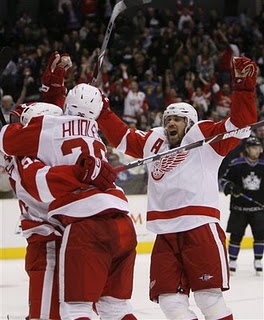 This brings us to: Denis Gauthier. Ahhh, Gauts. You're on the left side with the center of the ice wide open with less than two minutes to go in the 3rd period and your team is up by one. Why in god's name did you pass up the middle? This turnover cost us the game. It literally did. How many people expect their respective goalie to stop a Valtteri Filppula breakaway? Yeah, I didn't expect Jason LaBarbera to stop that either. There were at least two other options to make with that pass, instead you go with the third and incorrect choice. I know he feels horrible about the pass; his actions after the goal was scored weren't lost on me. But still, the game was at an elevated stress level for me as it was, and watching Filppula snag the puck and charge toward Barbs was a downright heart breaker.


The Overtime frame was five minutes of ridiculousness. I'm sure the acids in my stomach were taking over and churning and churning and churning because I had a tummy ache for the rest of the evening. Ugh. So OT ends and they scrape the ice for the shootout. This was about the time where I knew we had lost. I was predicting that it was going to be Brownie, probably Moller, and Calder for the Kings and Henrik Zetterberg, Hossa, and Pavel Datsyuk for the Red Wings. I'm not sure if I got Calder right since we didn't even make it to the third round. Osgood essentially shoved his pads down Brownie's and Moller's throats while Datsyuk and Zetterberg gave Barbs a good ole "hello nurse" with their respective dekes.

Not surprisingly the Kings end with less than 20 shots on, while the Red Wings had 37. All in all, I thought the Kings played really well against the Red Wings. There were some great plays throughout the entire game with virtually none in the first period. Actually, the first half of the first period saw almost no offensive jump from either team, but the teams busted out some sick moves here and there by the end and got the energy in the arena up. In the end, it was a good game for both sides. I just wish we had came away with the two points.