The Kings traveled to St. Louis to play the Blues and I had a few concerns going into this game: (1) Matt Moulson was benched for Kyle Calder, (2) Tom Preissing was benched for Peter Harrold, (3) the Blues have the #1 power play in the league and the Kings have the #1 penalty kill. It's definitely strange to think of these two teams doing this well on the specialtly teams, but that was the case and I was really nervous because I didn't want the Kings to end this game not 100% on the PK. But if they had to be scored on, I would have accepted it coming from the team with the top PP in the league. If you're gonna take it from someone, might as well be the best.

Overall this game was pretty great for the Kings. Not only did they dominate on the scoreboard, they took over on the ice for all three periods. To cap off the they game, they get their first shutout of the season! Well, that was a small fib; they didn't completely dominate all three periods. The start of the game saw the Kings take a bit of time to figure out how to play in the neutral zone. This wasn't a new occurrence since we've seen this in their other games this season. They're able to get the puck out of their zone, but get immediately shutdown by the offense of the other team once they get into the neutral zone. One they figure out how to start a game with this problem already figured out, they'll automatically come out with more confidence. 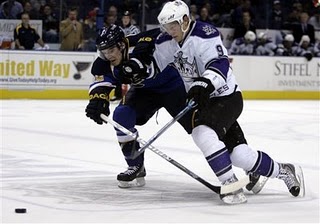 Look at him go!


This game saw everything but the Blues scoring. There were plenty of fights and penalties on both sides. The bout between Sean O'Donnell and Cam Janssen was cringe-worthy since Janssen gave O'Donnell about 73 left jabs to the head. Eeee. Interestingly enough, Wayne Simmonds, Matt Greene, and Brad Richardson got the other fights of the evening with Raitis Ivanans only being called for roughing in one of the scrums. At the end of the evening, the Kings are still perfect on the PK and have killed off 27 of 27 penalties. Now that there is only one other team in the league who is 100% on the PK (Minnesota Wild), I get incresingly nervous with each penalty the Kings have to kill. I like the big, round number of 100%. Other things that are big and round that I like: a fresh Noah's bagel, those jumbo novelty tennis balls that you get players to sign, Kevin Smith, etc.

Kyle Quincey opened up the scoring with a lob from the blueline, which was his first while wearing the Purple and Black (or in this case, purple and white). As great as that was to get on the board, Patrick O'Sullivan's corralling of the puck and sending it past Manny Legace was exactly what I expect from him. He's getting his work done and making a difference every time he's out on the ice. But Mr. No Personality still surprises me with his lack of outward emotion when someone takes a run at him. He just blankly looks around. Do you not have feelings Sully? Anyway, the Blues then debut Ben Bishop who is a whopping 6'7" since Legace injured himself stepping out onto the ice for the start of the game. He was a giant in the net and making anyone under 6 feet tall look like a little kid. He was doing well until Jarret Stoll got a Dustin Brown rebound and wristed it to the back of the net. Easy stuff. 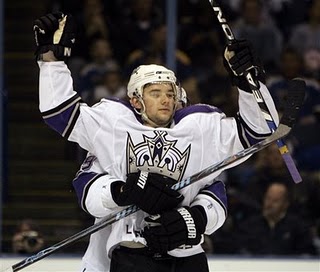 They love each other lots and lots


Once again, I gotta give props to the checking line. They're looking good out there for almost every single shift. I can't say enough good things about them, bla, bla, bla, boring, boring, snore. Speaking of props, I will grudgingly give a nod to Calder. He was out there doing what he was supposed to be doing, being scrappy and helping to create some room for Brownie and Anze Kopitar. I will also say that Harrold was not horrible either. He wasn't fantastic or anything, but he wasn't tripping over the blueline, which I predicted he would do a few times. He blended in pretty well with the other guys on D, but I'd like Tommy P out there tomorrow. Wait... did he and Moulson travel with the team out on this quick road trip or not? Bah.

So this puts the Kings at 3-3-0, which I'm very happy about. I just hope they can continue this into Nashville. We all know what happened last season. I still have nightmares. But this game ends with another great stat. The Kings had 29 shots on net while the Blues only had 15. Not only are the Kings still on top with their PK, they're doing well getting pucks to the net! So good job, Kings, and congrats to Jason LaBarbera on the win and shutout!