Share All sharing options for: Preseason - Kings 1, Ducks 2 (SO)

The Kings faced off against the Ducks last night for the first time this preseason, and, I must say, it was crappy. The defensive pairings were subpar and the forwards couldn’t land their passes to make decent rushes out of their own zone. There were noticeably more people attending this game compared to the first preseason game held at Staples, which meant that more people were subjected to the horrible defense of the Kings.

Let’s actually start with the forwards. Oscar Moller and Matt Moulson swapped ice time with each other to be on the top line with Dustin Brown and Anze Kopitar throughout the entire game. It was nice to see Moller getting big minutes and with the top two skaters, but there were times when he was just out of position. He obviously wasn’t making an obscene amount of blatant errors, but it was apparent that he was on a tryout with the top offensive pairing. There weren’t as many penalties in this game compared to Frozen Fury, so it didn’t seem like a night solely devoted to specialty teams. That’s not to say the reffing was fantastic or anything; in fact, it was straight up horrendous.
Okay I will preface this by saying I don’t play hockey on a daily basis, so I probably don’t have the authority to critique the refs, but… honestly. Since this game wasn’t televised, I’ll lay the scene out. It’s in overtime where the Kings are on the power play. Some Duck grabs a hold of Kopi’s stick and holds it across his midsection. Kopi notices this and puts his left arm up in the air to show that he’s not hooking or holding the Duck. The latter then proceeds to try and get himself tangled up in Kopi’s stick somehow and then magically trips and falls. Whistle blows and Kopi is sent off the ice for holding.

There is then a minute of 3-on-3 skating, which creates so much ice that it’s ridiculous. But just like in the regulation periods, the Ducks spend most of their time in the Kings’ zone. I am baffled as to how the Kings just couldn’t get anything going into the offensive zone. Sometimes they couldn’t even get into the neutral zone, but when they did, the Ducks blocked passes and shut them down around their blue line. The only way the Kings could really create chances were if they played the dump-and-chase card. I hate the Ducks so much. 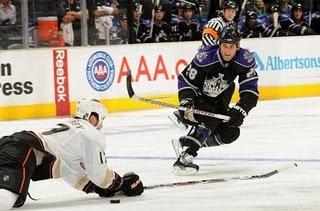 Jarret Stoll on the point? I guess I can live with it


The defense... needs work. I shouldn’t have been toooooo hard on the guys since both Jack Johnson and Tom Preissing sat up in the press box. I really think that one or the other should have dressed for the game since having both players out created a weaker defense. In Jack we could have had a physical puck mover out there or a positionally sound veteran dman in Preissing. Too bad we had neither player and had to resort to putting two 18-year-old dmen on the PK at times. Pretty scary stuff. There were also some ridiculously huge defensive breakdowns, especially in the first period. Davis Drewiskie, wow. I can’t really describe this one play that almost resulted in a breakaway for the Ducks, but he did get better as the game went along, thank god.

Barbs was in net for the entire 65 minutes + shootout. I thought he looked okay, but that doesn’t mean I wasn’t nervous as all hell whenever the Ducks got a shot on. For some reason I was super stressed out over this game. I know it’s just a preseason game and it’s not worth any points, but, damnit, I hate losing to them. Although, if this were a regular season game and you asked me if the Kings deserved the point for the shootout loss, I would have said, "hell no." The only real positive for me was that Moulson scored the lone goal for the Kings. He received the pass while standing with his back to the net to the right of the goal mouth. Since he’s a lefthanded shot, all he did was pivot to his right and stuffed the puck into Jonas Hiller. Other than that, the game was pretty bad.