The whole crosstown rivalry with the Anaheim Ducks is something that I don't get too caught up in, but that doesn't mean that I don't hate the Ducks more than any other team in the league. I do hate them the most, and, for the second day in a row, I'm bummed that the Kings have dropped a game. But the Kings didn't get shutout by a poor showing; they displayed their usual solid play but were actually less able to generate chances when compared to the game yesterday against the Preds.

There were four PP opportunities for the Kings with one being a 4-minute penalty but they weren't able to get anything going on any of them. The 4-minute penalty was actually played better by the Ducks than the Kings, which was... mildly.. frustrating... especially since the penalty came from an incident with Ryan Getzalf's stick accidentally making a beeline for Patrick O'Sullivan's face. This boy already has lost 4 or 5 teeth, he really can't afford to lose anymore; so when I saw him spit something out of his mouth that looked like a tooth, I definitely flashed back to last year when he took a puck in the face and had to have emergency dental work. But, whatever happened didn't seem to affect him too much since he was back on the ice before the end of the first period.

Once again Erik Ersberg looked solid in net. He was doing his usual thing of not getting rattled inbetween the pipes. Both Ducks' goals were even-strength goals with the first by Corey Perry. I haven't taken another look at the goal but I remember wondering where the D was on that rebound. Oscar Moller was the Kings player that was there for the initial shot, but the rebound couldn't have gone anywhere but in the back of the net. Bret Hedican's goal came with less than five minutes to go and was the game sealer. Terry Murray didn't pull Ersberg with two minutes to go and I wanted Brian Hayward to shut the hell up. You obviously know why he's not pulling Ersberg, so shut up about it! Ugh! 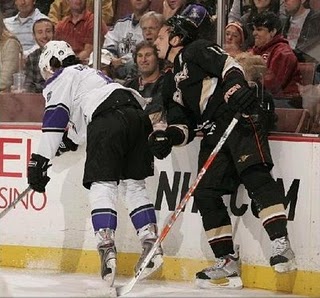 Is this the aftermath of a hit? Hilarious either way.


One surprising note, Wayne Simmonds got only 8:53 of TOI! Yeah, he's an ugly, ugly skater, but he had been getting around five more minutes than that on average. Drew Doughty logging 28:27 of TOI is... just... beastly... although he didn't record any hits. Actually the Kings were definitely outhit overall, 22-14. Boo. It appears that I've lost interest in this recap, so I'm just gonna... stop and go do something else.