One Down And One Up In Western Canada

Share All sharing options for: One Down And One Up In Western Canada

The Kings played Calgary on Wednesday and basically got their tails handed to them, but the game didn't start out that way. The first period made it seem like it was going to be a good contest. The shots were even and the goalies were looking pretty solid. But once the second period started the Flames got stronger and stronger. Even though the Kings lost a terrible 6-2, it definitely didn't look like one of those horrendous losses from last season where it seemed like they stopped trying altogether. The Flames just dominated a team that was struggling in all aspects of the game. The effort was visible, but nothing was working so I'm not going to jump down their throats. I'm not suggesting the Kings needed a loss of that sort since they've lost worse in past seasons. It was just another sign that this is a team that is still learning and feeling out the lines.

The one thing from this game that had and still has me a bit worried is the fact that Erik Ersberg was pulled and Jason LaBarbera was put in. Barbs then played last night against the Edmonton Oilers. Does this mean that Barbs will play until he has to get pulled? Is that how this is going to work? I guess that's fine... I'm not sure how I completely feel about it, but I can honestly say that I'm not feeling too confident about the back end anymore. Denis Gauthier did NOT have a good game against the Flames, and I'm wondering why Terry Murray is so happy with him. Yeah, he can kill penalties, but, really, he's made some horrible plays in general. He's definitely outside the circle of trust. 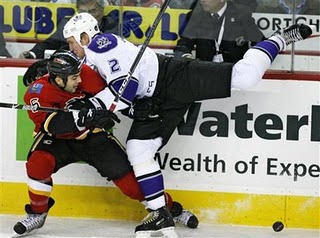 Greene though the Kings were figure skating that night hence the terrible, terrible hockey


Terry Murray reunited the Patrick O'Sullivan, Anze Kopitar, and Dustin Brown trio for the Flames blowout, but, once again, the very next game, Sully gets demoted and Kyle Calder gets put back on left wing on the top line. Gross. Why is it that when this awesome line gets a chance to shine, the entire team has an off night? What's the deal? C'mon Fates! Help them out a bit here! I'll give Murray one thing though; it's blatently clear that he's not going to coddle this line. One game to show him something; if not, it's back to the drawing board. I can respect that but can you please put someone else up there instead of Calder??

The bright spot: Sean O'Donnell. I'm so freaking happy he's on the blueline. He got a 5-minute fighting major, a 10-minute misconduct penalty, and a 2-minute instigator penalty. The game was already in the bag for the Flames but O'Donnell wasn't going to take shit from anyone, and he let the Flames know that. Talk about mentorship and leadership. On the flipside, Raitis Ivanans got 10 minutes of TOI and did nothing but take penalties. Let's think about this: last season when he'd get more than two penalties or so, he'd get less than 5 minutes of TOI. But in this game he got 4 penalties (8 total minutes) and 10 minutes of ice time. Was Terry Murray hoping Ivanans was turn the momentum of the game? Well, it didn't work.

One last thing about this game versus Calgary. I was watching the Calgary feed, which was on Rogers Sportsnet. Wow, whoever the play-by-play guy and color guy were, you guys were terrible! I'm so glad I don't have to listen to that for 82 games. Their "commentary" was piss poor and didn't enhance the viewing of the game at all. What they were saying wasn't biased in favor of the Flames; rather, it was terrible because they weren't saying anything of worth! "That was a great pass." Wow... is that all you got? Really?

The game on Thursday the Kings went against the Edmonton Oilers. The Kings bounced back very nicely and won 2-1. They returned to their disciplined play out-hitting and out-shooting the opposition, but they weren't over 50% in the faceoff circle. I'm blaming this on Derek Armstrong (4 for 11) and Kopi (8 for 18) combined with Michal Handzus playing on the wing. Jarret Stoll, you keep doing what you're doing. The Kings also took only 5 penalties in this game compared to 15 against Calgary. Were the interference calls against Brownie and Barbs really penalties? I don't know, but I'm not going to dwell on it. The penalties were taken and killed; end of story.

I WILL bitch about the boarding penalty that Steve Staios took against Sully. Dude is mere feet from the boards and you're gonna give him a shove in the back towards the boards? C'mon man, can you be a bit more mindful of the head of another player? Sure, Sully may have whiplash this morning, but can you not try to give him a concussion to go with it? Another change was that Tom Preissing was back in the lineup and Gauthier took a seat in the press box. I honestly thought Preissing wasn't going to make the mistakes that he did. They weren't as terrible as the ones Gauts has been taking, but still...

A rarity: the Kings scoring first! And wouldn't you know it, it was Sully who netted it and, amazingly enough, he showed emotion!!! If you haven't noticed it before, Sully usually scores and has a deadpan look on his face. No reaction whatsoever. But this was such a change that I even cheered more! Who knew he possessed the ability to have more than just a vacant look on his face?! 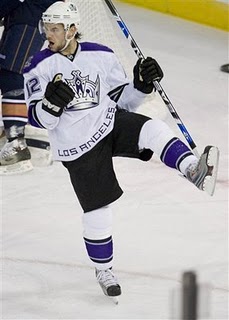 
Who know who's awesome? Dustin Brown. He's just freaking fantastic and I heart him. I know I heart a lot of things, but I REALLY heart him. He's just such a great leader and is getting noticed more and more and more. He can honestly do no wrong. He's a dynamically solid player who is doing nothing but getting better.

The second half of the game didn't see anymore goals, but it was a solid game for the Kings. I'm not sure how happy Moose was though. I think the text saying "We are an AWFUL hockey team" means that the Oilers are struggling. I'm not sure, but I think that's what it meant. In any case, the Kings got back on their ponies with this game and have a break until they face the Chicago Blackhawks on Saturday at the beautiful Staples Center.