Share All sharing options for: Close, But No Cigar: Calgary 3, Kings 2

If games were only 50 minutes long, the Kings might have been able to win tonight. But seeing as how The Man hates the Kings, Calgary was able to leave Los Angeles two points richer.

As sure as the sky is blue, the Kings went down 2-0 early in the game, and, as sure as how LA sees some rain, they were able to tie it up with just a few minutes left to go in the game. Alas, Daymond Langkow scored Calgary's third goal and Miikka Kiprousoff decided he wanted to give a bit of effort and shutdown the Kings off their closing attempts. There were numerous scrambles and shots on at the end of the game, but they weren't able to get anything past Kiprousoff. Even though the Kings lost and are now on a 4-game losing streak, I'm not mad at them tonight. This effort was completely different than their last game against Vancouver, which was basically disgusting and deserving of withheld nookie. Tonight they looked like they were actually playing with effort and gusto and gumption, but, it's the Kings, and they end looking like their typical selves by giving up that late go-ahead goal.

On an individual focus, I'm unsure as to why there is a hype surrounding a player's return when they come back to face their old team. I mean, I buy into too, but it usually ends up meaning nothing and we all get on with our super exciting lives. Michael Cammalleri's return to Staples Center really wasn't anything to hoot over. He got some shots off but wasn't making too much of a splash. He had one recorded shot and had almost 14 minutes of TOI. ZZZ...zzzz...zzz...

The highlight of the game: Oscar Moller scoring twice in the 10th game of the season, which marked the day after the Kings made the decision to keep him here instead of sending him back to Chiliwack. He made quite a statement tonight with the only goals scored by the Kings. How can you not love that face?? 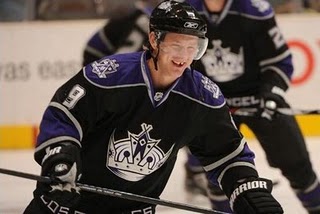 What a freaking cutie pie


On to everyone else, I guess. Jarret Stoll was slated to be on the 4th line at the left wing, but he was definitely not skating with those guys. I'm not sure how to gauge the lines as a whole since the game was so much better than the last. I think it'd be unfair to critique any line on its own, so I won't. On an individual note, this was another game where Patrick O'Sullivan was seemingly rubbing his nose where the Flames didn't want him to be. He got into a scuffle with James Vandermeer and there was some heming and hawing and when Sully wanted to get it going again, but the ref holding him basically body slammed him as best he could while on skates. Was that really necessary? I have to ask since he probably could have taken different measures to get Sully to back off. At the same time, I'm sure a slap on the wrist wouldn't have sufficed. In any case, the latter gets awarded with a 10-minute misconduct and Sully gets away with just a 2-minute Roughing minor.

An upside: two areas where we utterly dominated the Flames were shots on and hits. The Kings put 36 shots on net to the Flames' 21. Dustin Brown tallied 8 well-noticed hits. He was an animal out there, and the closest to him was Michal Handzus with 5 hits. Zeus is also still ridiculous with his faceoffs. Hats off to your 74% (17 wins, 6 losses)! I'm hoping the day comes soon enough to where I'm not shocked when you're above 50% on any given night. Going back to the hits, there were only two guys who didn't record a face to the glass motion, Tom Preissing and Alexander Frolov. This is fine seeing as how we're never expecting hits from these guys anyway. The most shocking stat goes to little Moller. He had the two Kings goals while only getting 3 shots on net and 14:29 of TOI! Badass or the Little Engine That Could? You decide.