The Chicago Blackhawks were in town and the Kings welcomed them with open arms, which they promptly used to squeeze the Hawks into submission. The Kings opened up the game with something that happens about once every month, score a goal in the first few minutes of the first period! A bit of confusion in front of the net concluded with Jarret Stoll being awarded the goal with Michal Handzus and Alexander Frolov assisting on the play. I think I'm getting use to hearing Handzus' name being announced over the loud speaker.

Besides the fact that the Kings won the game, there is a stat that must be put in the spotlight here. The Kings dominated the Hawks in the faceoff circle. It wasn't just a beating, it was a pounding of the epic sort. Stoll won 10 faceoffs out of 14 for a percentage of 71. Anze Kopitar beat Stoll by winning 15 and losing only 5 for a 75 win percentage! The third was Derek Armstrong with a 73 win percentage by getting 8 and losing only 3. 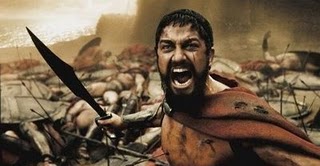 The first period seemed to promise 40 more minutes of play from two teams who seemed evenly matched, which wasn't really the case as the Kings proceeded to slowly take the game from the Hawks. That doesn't mean there weren't close calls. The Kings have been averaging a league-leading 24 shots against, which the Hawks were able to get by the end of the game. This may not seem like a big deal, but it is when it's rare for a team to get that many shots past the defenders and onto Erik Ersberg. The little one was seeing a lot of rubber flying his way, but he looked pretty great once again. He did end with two pucks getting past him, but it's not bad when you think about the 5 that got past Christobal Huet. The Kings threw their own 28 at Huet who looked a bit odd in neon-red pads. What nutjob approved that color?

After Stoll's game-opening goal, Fro notched one of his own in the second period. In the third period Army got his second goal of the season by driving the net and being the role player that he's become. Sweet action. This turned out to be the game-winner when the door was closed by Kyle Calder of all people. Here we were sitting in our section talking crap about Calder all through the game and then he scores. What a buzz kill.

What Kopi visualizes as he approaches the faceoff dot...

The Blackhawks attempted an early salvage of the game when they pulled Huet with just under three minutes remaining. With this, Patrick O'Sullivan roofed an empty net goal and the arena started to empty out. Oddly enough, Sully played two more minutes than Kopi, but when looking at the stats, I can see why. The time that Sully was on the PK shoots his number past Kopi in that aspect, which is fine. We really don't need Kopi getting hurt by blocking shots.

Army, just because you're not scratched doesn't mean you can go kicking people...


All-in-all, I thought this was a well-rounded game. The 1PM start didn't seem to hurt the Kings in any way. The minutes played by everyone seemed to work well, sans Calder getting 15:00 of TOI. Honestly, is there no one else who can play the top line left wing?? He's not creating anything and when he does get the puck he either makes a shitty pass or waits too long to take the shot, which causes him to take a no-angle shot. Hence, he sucks. P.S. He also needs to be taken of the PP. Not just on the first or second unit, but both. He should be on the bench during those minutes. I'm completely confident that Oscar Moller could eat up those minutes without any problems.