Is This Really Happening?: Kings 3, Stars 2

Share All sharing options for: Is This Really Happening?: Kings 3, Stars 2

Four wins in a row? I'm still watching the Kings right? According to ESPN, the last time the Kings have had this long of a winning streak was back in October of 2007. A bit lame, but, hey, I'll take it. We're on one now and that's all that matters. This game was much easier won than Tuesday's game where the Stars hung on for the shootout. Everyone has been looking really good... wait, that's a lie. ALMOST everyone has been looking good.

Good: Erik Ersberg, Drew Doughty, Dustin Brown. Doughty lead the team with 27:05 of TOI with the average shift lasting a minute long. Impressed? I think so! I absolutely cannot wait for Jack Johnson to get back to the lineup. I can't imagine what it's going to look like with another huge body back there. Ersberg notched another win on his fourth straight start. I trust and respect Terry Murray's decision not to name the Swede the number one until he's comfortable with his conststancy. I can see exactly his reasoning and won't be terribly disappointed if he waits a long time to make it official.

Not good: Denis Gauthier. I don't mean to make him my goat, but he makes egregious errors and it needs to be pointed out. He only had 11:48 of TOI in the game, which let's me know Terry Murray is seeing what everyone else is seeing. 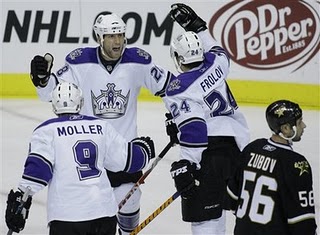 
The Kings won 65% of the faceoffs with Jarret Stoll winning 11 and losing just 4 giving him a 74 percentage!! I am very impressed. I basically have no complaints with this game. The Kings came out and worked hard at the start all the way to the finish. Well, I'll point out that the Kings scored only two (2) times on nine (9) PP opportunities. They're getting there; I'm not complaining. Just pointing it out. They ended with 29 shots on and limited the Stars to 26. I'd have liked the Kings to have at least 32 shots on, but I guess it doesn't really matter since they won. Go Kings!