Share All sharing options for: Oh, Captain. My Captain. Kings 3, Stars 2 (SO)

The Dallas Stars came to Staples for the first time this season, which marked the end of a 7-game home stand for the Kings. This game started out on a good note, but I was a bit afraid that it was going to slowly take a downfall for the Kings. They came out of the gates at a good pace getting 11 shots on to Dallas' 8, but the Stars were the ones that stepped up their game. They got their heads' screwed on straight and made this game interesting.

Dustin Brown had a monster game. He tallied a goal, got 20:27 of TOI, had a team-high of 5 shots on, and another team-high of 6 hits. His most notable hits were (1) placing Stephan Robidas ever so gently into the Kings bench, and (2) putting Mike Ribeiro into the boards. (Note: Please see FSN's telecast of Jim Fox's breakdown of this clean hit.) Brownie left the game with a minute left in the game, and the Kings were left with a 3-minute PK to deal with that spilled into overtime. I absolutely loved Brenden Morrow coming over and fighting Brownie. Captain versus captain. Badass against badass. You really couldn't have asked for a better matchup in that situation. 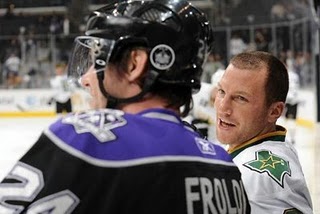 What the hell, Fro?! You're cheating on me with Avery?? UGH!

With everyone gushing over Drew Doughty, I feel I need to add to it. He can't be 18 years old; he just can't. He looks so good out there and he's working so well with Sean O'Donnell that he couldn't have been playing with teenage boys a few months ago. That being said, with the way this boy is playing, there is not enough adoration being sent his way. We Kings fans can get on our knees and thank the Defensive Hockey Gods for sending him our way, but that's not going to get his name out there any faster. It's too bad that he has to get points in order to get some national attention, but that's okay! His job is to help the Kings get better and, on a nightly basis, he's not disappointing. Gush, gush, gush.

Erik Ersberg gets another win putting the Kings on a 3-game winning streak. I would be shocked if Jason LaBarbera got put back in net for the next game. There really is no reason for a goalie switch right now. Ersberg is doing well and he's getting great support from the rest of the team. The team that's on the ice right now is not the team that was there last season. I'm not talking about the names on the roster. I'm talking about the work ethic and desire to work as a team. They're the fundamentals of the game and they had been non-existent. I can't say enough about how happy I am to see my boys having their shit together on a nightly basis.

But, one certain defenseman did NOT have his ish together. Denis Gauthier. Really, dude, can you stop having defensive lapses? I'm not understanding why Terry Murray thinks Tom Preissing is a defensive liability when YOU'RE the one that's mishandling the puck at the most inopportune times!! Yeah, you can hit, but you need to work on the passing. One of those pesky fundamentals, right?

This marked the longest shootout of the season so far going five (5) rounds. The first three shooters were Patrick O'Sullivan, Wayne Simmonds, and Anze Kopitar. Sully, please get another shootout move. Marty Turco knows exactly what you're going to do; he's not an idiot. Simmonds scored on a beauty of a backhand and Kopi was blocked. The fourth round saw Doughty, but he got super fancy with the puck and wasn't able to get a decent shot off. No matter, Alexander Frolov brought home the bacon with his shot and the Stars left LA with only one point. Thursday the Kings face the Stars again, this time at the American Airlines Center. Fingers crossed.

P.S. Hey, Dallas fans. Why are you paying Sean Avery so much money again?