Share All sharing options for: The Panthers Are Just Plain Awful; Kings 3, Panthers 2

Just as my title says: The Panthers are just plain awful. And, really, that's saying a lot coming from a Kings fan. Well, first off, I couldn't believe how few people were at Staples Center. A couple thousand? But, there is really no draw with the Panthers even though they're one of those teams that is tucked away in the Eastern Conference. The game started and the Kings proceeded to hold a clinic for the first two periods. They utterly dominated the Panthers in basically every facet of the game even though there was definitely a different feel to the flow of the game. All of the missed passes, turnovers, and takeaways made the movements of the players a lot more fluid as opposed to when the passes land and either team sets up shop in the offensive zones, which is a big difference (for me) between the Eastern and Western Conference, respectively.

Is it too early to have thoughts about Rookie of the Year? No, really; c'mon, hear me out.

All offseason I thought that Teddy Purcell was a shoe-in for that Calder Trophy, but when he was reassigned to Manchester (boo), I was wondering if Drew Doughty might be able to garner said attention. First off, I definitely think he can make a strong case for himself with how well he's playing and will continue to play. Secondly, I believe that Oscar Moller could also make quite a showing. Don't get me wrong, there are plently of other rookies out there who are making a loud splash just because they're playing in the Eastern Conference (a.k.a. Luke Schenn) *doe eyes* ... sorry, ummm. Oh yeah, but if Moller can maintain his presence and points production, I'd be utterly appalled if he wasn't in at least the top 5 among all rookies. The first thing I noticed when I glanced at the stats sheet after the game was how little the ice time was for him (13:52); I say this because I thought he was out there for more shifts (16) than he actually got. 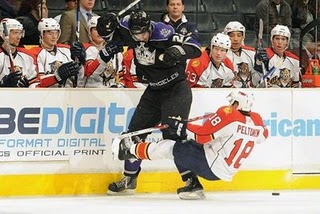 This is basically how the game went.


I'm really glad that Brian Boyle finally got his first goal of the season. I was starting to wonder if he'd ever get his first point, but his line with Patrick O'Sullivan and Peter Harrold was definitely a noticeable one. Sully continues to be his scrappy self and Harrold... isn't falling down as much anymore. Tom Preissing's goal on the PP was so predictable. The Kings had been cycling really well and everyone was bunched up to the left of Thomas Vokoun. When the pass got to Tommy P on the left point, he wound up and I knew Vokoun wouldn't be able to slide across the crease in time. Slick.

There were some good slugs to the face with two fights to entertain the crowd of an announced 26 people. Kyle Calder got in a healthy scrap with Keith Ballard and Denis Gauthier got in a heated tussle with Gregory Campbell. I'm not really sure what sparked this second matchup, but Gauts went at him with all the heart he could muster and the fight ended in about 4.985 seconds. 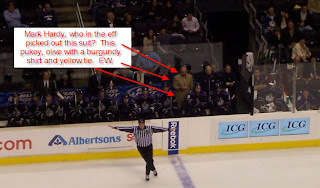 The best stat was, once again, the shots on. After the first two periods, the Panthers only had 6 shots on Erik Ersberg. 6! They ended wtih 15 while the Kings put 32 on Vokoun. Annoyingly enough, the Panthers sprung to life with about 10 minutes to go in the game and Nathan Horton scored a shorty on Ersberg with less than a minute left to make it 3-2. It's not that the Kings started to fatigue and unravel in the waning minutes of the game; rather, the Panthers decided to show up and started to apply the pressure. Who knows what the outcome of the game would have been if they had come out the gates like how they finished. But, let's not live in the past; the Kings have bigger fish to fry tomorrow when they face the St. Louis Blues.

When I think about the supporting cast in professional sports, I think about men in suits surrounding their respective teams. More often than not, these faces are nameless and are only supposed to be a supplemental part of a whole. Last night, this man, Jamie Pringle, made an utter fool of himself seemingly without knowing it. The Panthers' television broadcast booth was empty save for one gentleman and this lunatic. The one gentleman sat in the booth and appeared to just be a calm observer. Mr. Pringle, on the other hand, stood for the entire 60 minutes and was visibly irritated at every Panthers' missed pass or failure to hold on to the puck. Everything the Panthers did wrong, this man stood there shaking his head, gesturing with his arms, and speaking with the statistician in the radio broadcast booth who was also visibly reacting to the Panthers.

I had figured that the former held some sort of position on the coaching staff who took up shop in the booth by himself. Later a friend pointed out that it could have been as simple as this guy's job being on the line, which may have been why he couldn't control himself. I thought this was a very good point, so I went online this morning and tried to figure out who this turkey was. Turns out he's the video coach, which I'm assuming is a job that causes him much internal pain. Be that as it may, act like a freaking professional! Especially when you're the visiting team! You know never know when someone's going to take an interest in what the hell you're doing.