The Kings brought a dominating performance on the ice against the Washington Capitals. They had a great first period by not allowing the Caps any room in their zone, which translated into the latter getting only three shots on. I honestly think teams are shocked when they come to Staples and are limited to less than five shots in the opening frame because the shots total rises with each subsequent period. The Capitals fell victim to this trend, which really wasn't surprising. They were playing without Alexander Semin, Sergei Fedorov, and Matt Green. These three are definitely key players to their lineup, but, what's the saying again? Oh right, "no excuses." The Caps were outshot 33-21, which continues to amaze me and make me so proud of my boys. We also outhit the Caps 34-29. Team leaders were Brian Boyle (shocking) with 5 and Alexander Ovechkin with 7.

The top line of Patrick O'Sullivan, Anze Kopitar, and Dustin Brown was reunited and they played a great game. Respectively they tallied an even-strength, short-handed, and power play goal. But the evening's first goal came from Drew Doughty from the point. It was just perfection and we proceeded to stand up and cheer four more times after that. Later in the game, Doughty was actually almost completely undressed by Ovechkin, but Drew stuck to him and broke up the individual rush. It was nerve-wrackingly awesome.

The one blemish on the stats sheet: Kyle Calder getting 15:36 of TOI. Really? Is that really necessary? He really wasn't helping out the team with any of the shifts he took and myself and I believe everyone else in my section was experiencing the same sort of wrath. 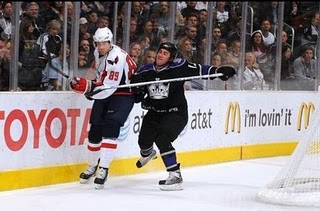 Another blemish on the roster


Halfway through the third period, there was a rush to the Kings net and it ended with a lot of bodies in the crease. When the whistle blew, Ovechkin was the only one still kneeling on the ice. He appaently got hurt somehow, which I missed, and when he got up and skated to the ref to give him some words, Staples Center proceeded to boo his ass. I've never actually heard a crowd boo a player when he has gotten up after being hurt in some way on the ice. It was a little odd but Ovechkin ended up getting an interference penalty at the end of all that and he looked fine. He just needed to shake it off, whatevs.

The game ended two quick Kings goals in the last minute of the period, which took the game out of the hands of the Caps. We cheered. The Kings had a decisive win and we all left Staples Center happy. The end.