I was unable to view any of the game yesterday due to my personal life, but I did make it out to Dodger Stadium for the Meet The Players "party" this afternoon. I was able to "meet" Oscar Moller, Raitis Ivanans, Kyle Quincey, Denis Gauthier, Erik Ersberg, Wayne Simmonds, Sean O'Donnell, Michal Handzus, and Jarret Stoll. My friend, AJ, stood in line for an hour to see Dustin Brown. So while I saw 9 of the players, she only saw 5. Bummer for her but she got what she wanted, so it's all good. General thoughts from the "party":
If you're my friend or "friend" on facebook, you'll be able to check those pictures out. Good times had by all. Oh, this was also my first viewing of the third jersey. It's... fine. It's another black and white jersey. I LOVE the Gretzky Black and Silver era, which this was attempting to harken back to, so I can't be too critical. According to our little handout we recieved:

The KINGS alternative uniform is designed to give us a fond look back to glorious times for our franchise with an eye to the future to inspire players and fans alike for what lies ahead... a future that is grounded with the values, the determination, the pride and the passion that serves as the foundation for the LA KINGS franchise.

Fine, fine. I'm just glad it's not as hideous as some of the other 3rds that have been rolled out. Ahem... Ottawa. Anyway, I got some pucks signed, but I ran out so I just started having them sign the front of my jersey. The only person allowed to sign the back is Brownie. That is all.

After the day wound down and AJ and I were headed home, we drove by the Forum in Inglewood, which was looking like it was up to no good, and it totally doesn't look right without the "Great Western" up there. So I added it. 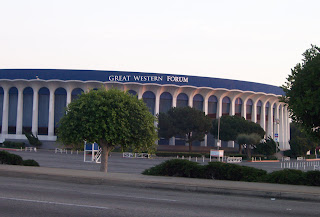