Share All sharing options for: A Flip-Flopping Good Time; Oilers 5, Kings 4 (SO)

The Kings are now in a 3-game losing streak, but it really doesn't feel like it. We still got a point last night but we had to take this crazy game to the shootout. The Edmonton Oilers scored three goals in the first period on 11 shots on Erik Ersberg and Jason LaBarbera came out for the next 40 minutes where he proceeded to let in only one goal on 30 shots. Pretty shocking but a familiar feeling (read: shot differential similar to last season). The Kings ended with 44 shots against, which is utterly ridiculous considering how they've been playing all season. The Oilers ended with 36 shots against them, which is normal for the Kings to do to their opposition, but this game was definitely back and forth.

The Oil dominated the first period whereupon Moose reassured me that his boys don't play a full 60 minutes whilst threatening a 12-year-old kid on the concourse. He turned out to be correct when the second period opened with the Kings blasting out the gates. Four goals and 20 minutes got the Kings up 4-3 with a full period left to play. Ridiculous. The openness of the game was a bit surprising as well, and there were some sweet individual moves and plays. I.E. Ales Hemsky doing about four toe-drags... in a row... like in the same possession.
(AP Photo/Chris Carlson) 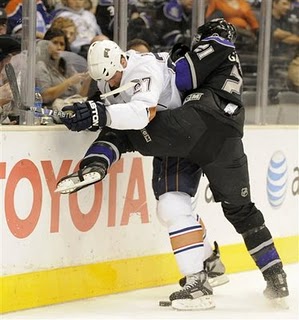 Honestly, Gauts. Now is not the time, nor the place...


The prettiest goal had to have been be from Jarett Stoll. Right-shot on the right side gets the puck and wrists it up past Mathieu Garon's left shoulder. Sick. The most ridiculous save was by Barbs in the shootout. Actually, he had plently of surprising saves! It's amazing how plesently surprised you can be when you're not expecting anything from your goaltender. This isn't me being a jerk; I love Barbs. He's the most chill guy you'll ever meet, but I can't invest so much emotion in his play anymore. I've been hurt too many times. So, yes, his play was good besides some instances when he was out of position and the Oil would just miss the net completely.

Do you know who is a waste of space? John Zeiler. He played 4:23 and did absolutely nothing. We don't need two players who are going to play less than five minutes on the playing roster on the same night. Raitis Ivanans? You notice that monster of a man; he has a purpose. Zeiler? Waste. Of. Space.

So the Oil get a win under their belts as they head up to San Jose and try to play in the same sand box with the Sharks. Have fun up there, boys. My Kings play the Columbus Blue Jackets tonight and I forsee this being a bit easier than the Sharks.

Last thing: Read Tom Preissing's 5th post! Intelligent hockey players do exist! It's like finding a diamond in the rough.