So the notion that goalies can win/lose games for you became crystal clear tonight. Jason LaBarbera blew it for his teammates. The forwards and defensemen were getting the job done; they were blocking shots and getting in the passing lanes. When the Rangers scored on the third shot of the game, I knew that something was wrong. DISGUSTINGLY WRONG. And it wasn't a shot that was deflected or an ugly goal mouth scramble; no, this was a shot that he originally caught, but then it trickled past him, and went right into the net.

I was angry. I mean, the Rangers had only had two shots on net until the last minute of the first period and then Barbs had to go and allow this?? It completely killed the good vide in the building and I missed Erik Ersberg badly. It's the kind of heartache you feel when you suddenly realize that it has become too cold for Pinkberry. The Rangers second goal wasn't any better. At the beginning of a PK for the Kings Jarret Stoll's stick breaks and the ref said he threw it toward the puck carrier. Wow... really? Anyway, Michal Rozsival gets a penalty shot and scores top shelf on the back hand. That's right folks, this is the way to score on Barbs. Go in for the shot, deke a couple of times, and when Barbs is on his stomach, flip it up top shelf. Everyone knows this, so I'm not giving away any trade secrets here.

I'm disappointed with this loss mostly because the goaltending was, once again, the weakest spot for the Kings. Everything was looking good after about 10 minutes into the first period since the teams were just skating around and feeling each other out at the beginning. But then the Kings peppered the Rangers and it seemed like it was in the bag. The last two games have been lost in the post-regulation time and we got two points, but that easily could have been three or four. But I don't want to be down anymore; there are plently of positives to be taken from this game. Stoll once again proves awesome in the faceoff circle going 81%!! Sweet action. 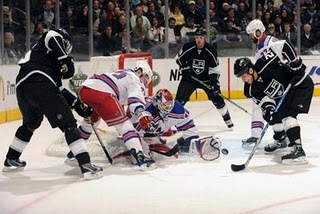 
The Kings outshoot their opponents (41 to 30), but are outhit 42-31. Dustin Brown got 7 hits and was his usual stud-self on the ice. It's amazing the kind of presense he commands when he's on the ice now. What is it that's changed? Is it the confidence? That has to be it, right? He just commands the attention now and isn't taking crap from anyone. Drew Doughty got 26:15 of TOI with three shots on net. He took the risk with his offensive rushes with one coming in the OT frame where he just looked completely comfortable.

Set up to a question: Raitis Ivanans played less than two minutes, John Zeiler played less than three, and Teddy Purcell didn't take a shift in the third period. What is the point of having Zeiler on the team again? Since Brad Richardson is on IR now, why can't the Kings put Peter Harrold back on wing temporarily (I know, I know, don't strangle me), send Zeiler down to Manchester and give his minutes to Ivanans, and put Teddy back in the goddamn lineup?! Oh yeah, and put Tom Preissing back in the lineup!!!

All-in-all, I was sad with the outcome, but happy with the way the Kings performed. The sense of consistency is one that is getting more and more common, which is exactly how it should be. No more crappy streaks please; I'll allow for the rare sub-par game or blowout, but that isn't the norm anymore. Once Ersberg gets his Swedish ass back in the net, I'll be able to breath a sigh of relief when the puck drops.