The Kings snap their three-game losing streak with a win over the Columbus Blue Jackets. We definitely needed this win seeing as how the boys were dropping very quickly in the standing with each loss. Even though this was a win, it started out as just about the most boring hockey ever. The first period was a little painful to stomach actually. I wasn't necessarily fighting sleep, but the brain cells that help me to function on a daily basis were slowly melting with each passing minute. Funny enough, the Kings outshot the Jackets three to two in the first frame. Let me repeat that. The Kings had 3 shots on net and the Jackets only had 2. Unbelievable. 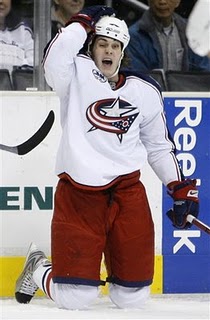 Jared Boll thought the game was boring too.


One thing I was looking forward to was that I got to see Steve Mason live and in color for the first time. He's a lot bigger than I thought he was gonna be, but he was competent enough even though he tallied a loss for this game. The Kings only put 18 shots on the Jackets and got three goals with one being an empty netter. The Jackets had 23 shots on Jason LaBarbera who looked pretty good again except for the occasional ugly rebound. I'm not sure why he lets rebounds out so easily like that. You're a professional athlete; you can gobble those up, right? But he got the shutout and was the first star of the game, so I can't hate. 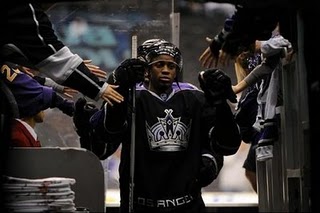 Too cool for school, Walter Cronkite


The scoring began with Wayne Simmonds who got a break in the second period and charged toward the net taking a shot that wasn't looking too promising, but it actually went in! It went far side and Mason just couldn't get it. We actually all thought the first goal was scored by a one Patrick O'Sullivan who was on his own break in the first period. But he lifted the shot, it hit the post, and bounced off Mason's back, which was why the angle of my line-of-sight made it seem like it went in. Later in the game Sully got the chance to take a penalty shot, but that one was unsuccessful too. Lame.

I know this is old news (old hat?), but I can't ignore it. You know who had too much time on the ice again? That's right, ladies and gentlemen, John Zeiler had 8:24 of TOI. He was just plain horrible; he did absolutely nothing to help the team. He's an offensive liability because he just runs around and hits whatever, and he just came off a suspension! Just please put a leash on that guy.

Conversely, can we take a guess as to who ISN'T a liability? He goes by the name of Drew Doughty and is just about our most highly coveted prospect. This kid is going up against the top flight players in the league and he can do no wrong. I think the big test for me personally was when he faced Alexander Ovechkin. When I saw that he could stick with Ovie without any problems or hesitation, I was completely confident for this game against Rick Nash. Doughty logged 25:05 of TOI and looked fantastic while doing it.

I feel like I'm repeating myself. I need something new to say, pretend that I'm actually smart. I give praises and critcisms all the time it seems. Maybe I should focus on someone else for a bit... Sean Avery? No, eff that guy. Actually, I need to drop him from one of my fantasy teams...

Ok, picked up some Vancouver guy. Anyway, so I can't think of anything interesting or funny to share with my faithful readers. Although I did hear Nick Nickson say that the guys at the NHL Network recently called him up and interviewed and filmed him for their "Voices" segment that is running all through this season. Be sure to be on the look out for that! Okay, I'm going to transfer the "snooze" from this Snoozefest of a game and take it into my bed. Night all.