Share All sharing options for: Yay For Winning! Kings 3, Wild 1

The Kings once again proved that those clunker-type games are coming around less and less. I wasn't sure what to expect going into this game against the Minnesota Wild, but I knew it wasn't going to be a cake walk. Although.. how does one walk on cake? Walk in cake? No clue.

Once again Marian Gaborik was not in the lineup, and ever since the rumors started of him coming to LA, I couldn't care less. The longer he's out of their lineup, the less chance there is he's coming to LA, because, really, I don't want to pay him big money if he's going to be sitting on IR. What's the point? The one Wild that stood out to me was Mikko Koivu. He was a lot scrappier than I thought he was going to be, and did a good job clogging up the neutral zone when the Kings were on the attack.

The top defensive pairing of Drew Doughty and Kyle Quincey has been killing it, as per usual. I have no complaints with the defensive, but there are two things. (1) I think I'm not as angry with Peter Harrold getting so much ice time because I'm so focused on how poorly Denis Gauthier has been doing. (2) I'm still wondering why Tom Preissing has been benched for as long as he has when Gauts has been sucking balls on the defensive end! Yeah, Tommy P doesn't kill penalties, but Gauts sucks on the even strength. Pick your poison.

Teddy Purcell got about 2:40 more TOI than his first game up, which was virtually all during even strength play. Hopefully his time will go up when Terry Murray sees that he could play on the special teams up here, although I'm not sure where he'd go as of now since our special team units aren't doing poorly. And speaking of ice time, where is Oscar Moller's ice time going?? He played less than 10 minutes! Well Wayne Simmonds played almost 13 minutes, so that could be it. Although, you could easily find an extra five minutes if you just took John Zeiler out of the lineup completely... 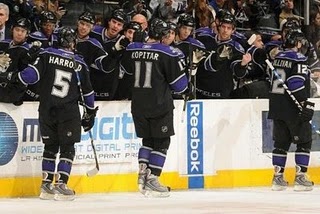 
Once again the Kings outshoot their opponents (43-34) and three of the four goals were on the PP. I'm glad we won this game against the Wild because the San Jose Sharks are going to whip through town on Monday. I don't think I'm going to expect a win that day; I'll just go and be an observer. The only thing I hope for is that the Kings don't come out flat-footed because they really can't afford any of that on their end. It's obvious what the Sharks are going to do, so I just want a good fight out of my boys.