So the Kings have lost four in a row but it really doesn't feel like it. The previous four games have all been lost in different fashions; a shootout loss to the San Jose Sharks, an OT loss to the New York Rangers, a blowout against the Buffalo Sabres, and a regulation loss to the Detroit Red Wings, respectively. Tonight the Red Wings beat the Kings 6 to 4 and yesterday the Sabres shut them out in an ugly 5-0 contest.

The game against Buffalo was a weird one; the last three meetings have been completely one-sided with this one not being any different. I thought the Kings would get the win when they were completely outshooting and outworking the Sabres. The Kings had 40 shots compared to their 23. Jason LaBarbera was the unfortunate soul in net for four of the goals and then Jonathan Quick let in the remaining two. Virtually all were odd goals that were going in one after the other, and after Barbs got pulled I kind of lost hope for the Kings to come back, which is not what I should be thinking because they can come back. They've displayed that fight before and I generally do have confidence in them to do so, but yesterday was slowly going down the toilet. 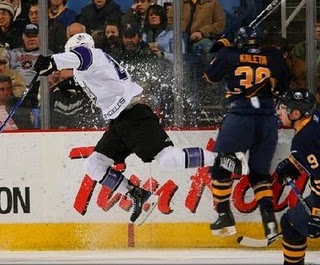 Side note, I thought Patrick Kaleta was a total douchebag for trying to challenge Denis Gauthier and then not even throw down the gloves! What the eff was up with that?! Why would you challenge someone when your team is up four goals to nothing and then not even follow through with it?! Well Katela got what was coming to him because Gauts didn't even hesitate. He threw off his gloves and gave Kaleta a sock in the teeth and he went down like a sack of potatoes. I shouldn't be mean and say he deserved it, but he really did.


Tonight Quick was in net and I was just hoping the Red Wings wouldn't demolish my boys. They didn't, thank god, but they definitely got stronger through the game, which forced the Kings to try and keep up with them, which is nothing new considering it's the Red Wings... With a combined four goals and 25 shots on in the first period, I wasn't sure what to expect for the rest of the game since neither team was getting too much of an opportunity to set up for too long in either zone. There was a lot of neutral zone play with a lot of subpar passing, but there were still plently of goals getting past both Quick and Ty Conklin with the most memorable one being where Alexander Frolov got a pass from behind the net and skated the half circle of the goal crease and put it past the Wings. Kinda pretty and ugly at the same time. 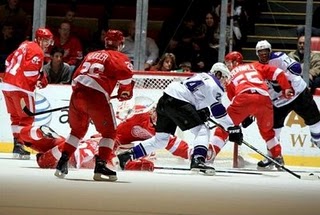 Is this really the lighting in the Joe or is it just the angle?


Congrats to Trevor Lewis for notching his first NHL goal and point, which he didn't even get to really celebrate. His shot didn't get through cleanly, which was why everyone thought Patrick O'Sullivan had backhanded it in. I didn't doubt Sully got the goal because he's just that awesome, but Lewis got it and I'm sure he's happy about that but it definitely is overshadowed by the loss. Can you really call this a heart breaker when you weren't expecting them to win in the first place? It's a question that keeps me up at night. Those are some long and lonely hours, let me tell you. The Kings looked like they had hope until the last few minutes of the game when Jiri Hudler scored, and then Dan Cleary, and then Kris Draper. Crud.

Teddy Purcell was moved to the 4th line in the game against Buffalo (13:29), which was where he stayed for tonight's game (6:29). His minutes were reduced by seven minutes while Lewis went from 9:14 to 15:08. Needless to say (since I've said this from the start of the season), I'm disappointed that Teddy didn't make the team out of training camp and I'm bummed that he's not doing well now that he's actually up here. He got the chance to shine in his first game up by being on a line with Dustin Brown and Anze Kopitar! How can you not take that opportunity and run?! I'm keeping my eye on you, Teddy; you'd better shape up!

So the Kings begin a new week starting tomorrow where they'll face the Columbus Blue Jacket on Tuesday and I really hope they break this losing streak that doesn't really feel like a losing streak. They need some points here! I'd like to get above .500 because it feels like they're just trying to keep their heads above sea level.