The Kings don't disappoint as they route the Phoenix Coyotes in the second game of this back-to-back. I was a bit wary that they wouldn't be able to pull out the win purely due to the fact the game was in Phoenix and the Kings didn't have the home crowd behind them. But as Jim Fox said after the game, the Kings have usually won the game following a messy loss and this was no exception as they shut out the Coyotes four to nothing.

To start, the first goal of the game was pretty spectacular; Raitis Ivanans took a slapshot coming across the blueline and it went in beautifully over Ilja Bryzgalov's shoulder. I think everyone was surprised by that one, especially Ivanans! He leaped into the air in sheer joy and the look on Jarret Stoll's face was priceless. I'm pretty sure he took the shot just to get a shot on net, nothing more. But it was a great and surprising goal to start off the game. Go Raitis!

An interesting thing to note about this win was the ridiculous number of penalties the Kings took. Their play didn't look particularly undisciplined, but they were getting called every other minute it seemed. They had 10 total penalties against them with one being a fighting major, which was John Zeiler squaring off against Daniel Carcillo. I wasn't too impressed with the encounter in general and was definitely expecting Carcillo to win because, well, it's Zeiler. The Kings penalty killing units stepped up and did a fantastic job on all nine infractions. Their control of those minutes was the complete opposite of the previous night's game, which made it that much more satisfying. 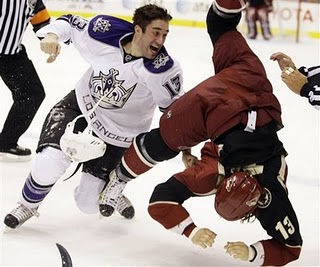 The only exciting part about this "fight"


Alexander Frolov was a standout in this game, not because of his stellar skating abilities (which appear to have gone straight down the toilet), but for his two goals. He was just in the right places and he's still the top goal scorer on the team as of this moment, which is a fact that I'm sure many people don't know, but he's knocking in the pucks and racking up the points. I'm still pretty baffled at how poor his skating has become and how easily he gets pushed off the puck. I don't understand what's going on with that, but it doesn't appear to hurt his point production considering he's not technically on either of the top two lines. Go Fro!

I was especially proud of Teddy Purcell in this game mostly because I had been so disappointed with his showing this season so I was extremely happy to see that he was digging in his heels and earning his ice time. Players have been getting lost on the fourth line with Ivanans and Zeiler with the latter being the main problem. In this game Purcell finally showed his potential and for one of the PP goals he set up Stoll beautifully with a cross-ice pass. I think he stood out as much as he did because of the time he got on the power play that totaled 6:02 and he looked pretty great; he was moving his feet, landing passes, and being an effective player. I think if he continues getting ice time on the PP, his upside will start to come out more on a game-by-game basis. Go Teddy! 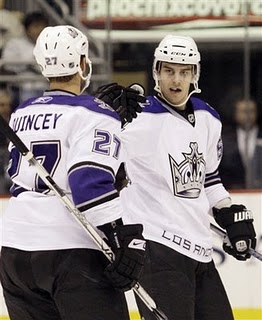 So proud of you, Teddy!


The stud of the evening was, hands down, Jonathan Quick. This boy was a wall in net and didn't have me nervously looking on at any point in the game. He did his job and did it well; he stopped all 26 shots sent his way with the post stopping two of their own. One thing about Quick is that when I was watching him play at Staples two nights ago, he looked kind of smallish side in the net; I didn't think he was more than six feet tall. But in last night's game where I was watching on the boob tube, he looked much bigger and Foxy even said that he was 6'1" and was over 210 pounds! Maybe I didn't think he was that big because of how well he was moving and his general athleticism when the Coyotes were making rushes to the net, but he was positionally sound and they were getting shut down every which way. Go Quick!

(Holla to Greener for saying Quick was going to be good. Two shutouts so far with excellent(ent) rebound control.

Erik Ersberg is supposed to be coming back any day now and this could potentially hurt the Kings because then Quick will get sent back to Manchester with Jason LaBarbera being backup on the bench. The idea of this is... not promising. I don't want to think about that point in time before it actually comes up; I'd rather just keep moving one game at a time and hoping the basement isn't where the Kings will be in a few week's time.