Share All sharing options for: My Poor Kings; Leafs 3, Kings 1

On Monday December 1st, the Toronto Maple Leafs came into town and battled my Kings. It was interesting to watch two teams that I have a very personal stake in. My Kings will always be number one in my heart, but my fondness for the Leafs is steadily growing. I still cheered my little heart out when Alexander Frolov scored the lone Kings goal in the first period, but at the same time I didn't want the Leafs to be losing. Very interesting feeling indeed.

I spent the warmups on the Leafs side of the rink with Greener and Moose of He Score, He Shoot! fame. Moose was your average, heavily-sedated fan while Greener had to be put on a leash. This boy seriously needed to be reigned in, so I took the fuzzy handcuffs out of my back pocket and cuffed his ass to a chair. This glass pounder actually had 3.42 seconds of fame late during the game. With my season seats in the upper bowl also comes many views into all of the broadcasters' booths. After one of the Leaf goals, who do I see out of the corner of my eye on the monitor showing Leafs TV, but Greener. Greener! That silly bitch was on TV! 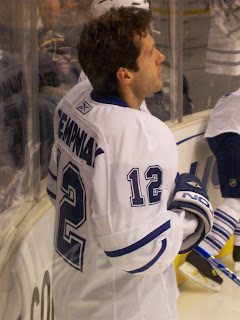 Stempniak was surprisingly not bad looking


The Kings were up 1-0 for the first 40 minutes of the game. Once the third period rolled around, the Leafs kicked it up a gear as did the Kings. But two quick goals against Jason Labarbera gave the Leafs the win that night. I know Terry Murray wants to give equal time to Barbs and Erik Ersberg, but I honestly would have put Ersberg in for this game and given Barbs the game against the Phoenix Coyotes. But I'm no hockey coach, so I'll just admire the Maple Leaf blue for awhile... 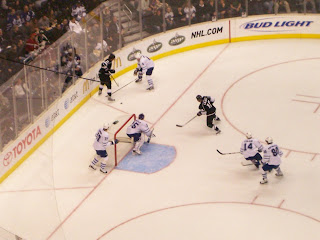 This was the first time I saw my boys playing in their third jersey since I missed the game against the Avalanche when it was debuted. I thought it was just okay when I saw the entire jersey for the first time, but now I'm thankful it's not as terrible-looking as other teams' thirds have looked. The Kings could have gone in a completely incorrect direction, but the throwback to the Black and Silver era with a modern twist works. Although I would have absolutely loved to see the retro Black and Silver jerseys, I can deal with this.

Back to the game, Matt Stajan and Mikhail Grabovski scored the two goals for the Leafs and Jeff Finger got the empty netter at the end closing the game out. I was definitely disliking how the Kings weren't able to land their passes in the neutral zone in the latter half of the game. The spunk and bite from both teams were milling about on the ice, which was frustrating in the second half of the third period when the Leafs took over the game. The Kings made a valient attempt at trying to tie the game back up; alas, my boys weren't able to pull it off and the Leafs left Staples Center two points richer.