Last night the Kings faced the New Jersey Devils and it wasn't pretty. The Devils soundly routed the Kings to a five to one victory in front of a "sell out crowd" at Staples Center. Three out of the five Devil goals were on the PP, which completely killed anything the Kings were trying to generate. The seven shorthanded instances were killer and the whole game was going down, down, down the toilet. In the end, the Kings had more shots on, which killed me because Kevin Weeks is not that great of a goalie. I don't know what you would call his style, but it's definitely not a pretty one.

Jonathan Quick, he let in five goals on 28 shots and I'm pretty sure Erik Ersberg will be starting in net on Monday against the Tampa Bay Lightening. I'm also hoping that Derek Armstrong will be in the lineup for that game in lieu of John Zeiler. I feel like there's a roster spot that's wasted when Zeiler is in; at least Army brings something to the table like leadership on and off the ice and the occasional goal. The one positive that sticks out in my mind is Brian Boyle. With every game he's slowly getting more physical and more imposing. I know management wanted him to get his game going by using his massive body more to his advantage, and I think he's understand how exactly to do that. He had four resounding hits during the game and his skating has definitely gotten stronger. Go Boyle. 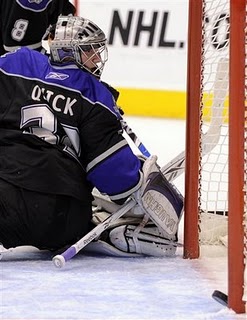 Same thing as a heart attack

Instead of talking about the game too much because it was kind of shitty, I'm going to talk about the insane couple sitting next to me. They had obviously arrived in their seats sans friends who were somewhere else in the arena. As Chris from KingsCast pointed out, it was like listening to people talk in a movie theater. I know what you're thinking, it's an arena with thousands and thousands of people there hooting and hollering, how can you hear two people? Well, let me illustrate. First off, the guy was getting toasted and started to wonder outloud how much advertising cost for the insides of the boards. Silly me had engaged him further into the thought process with the girl getting into as well; which brings me to: Second, the girl with him was incessent. She obviously knew the game and about the Kings more than the guy, but the sheer noise coming out of her mouth was like fingernails over a chalkboard. Also when this is the case, there is really no reason to be screaming bloody murder directly into my ear. Good god, woman.

Anyway, I could have done without the game in my memory bank, but it happened and the Kings have to just move along. The game against the Devils last season was poor as was this game; I hope next year brings about a better result for my boys. As Kings marketing has put it, the next game pits Steven Stamkos against Drew Doughty, and at this point in the season, I think Doughty has the upper hand.