Share All sharing options for: JMFJ: Kings 4, Islanders 3 (SO)

I don't have enough energy to write a full post, but I will say that out of these last five road games, this one against the New York Islanders has been the weakest one for the Kings. Well... you could argue that the one against the Ottawa Senators sucked too, but at least that was won without too much trouble. This game, on the other hand, was a different beast. The Islanders were forechecking the crap out of the Kings and I wasactually pretty surprised to learn that they're dead last in the league. Then again, one game does not a team make; I should know, I root for the Kings. 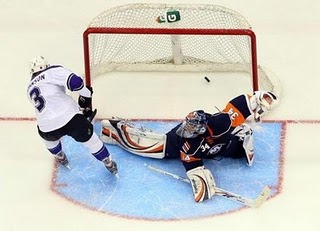 So this has been the second game where Jack Johnson has taken the 3rd attempt in the shootout. The first time was in his first game back from his injury a couple of weeks ago. I wondered what the hell Terry Murray was doing then, and tonight I threw my hands in the air when I saw the lineup flash on the TV screen whilst wondering where in the heck Anze Kopitar has been in the shootout. But Jonathan Quick (who was looking quite mortal tonight) made all three saves and Jack MF Johnson sealed the game with a nifty deck to the right and swinging the puck the other way. I will admit, if Kyle Okposo had made his attempt, I'd give him the sweetest shot of the night with that weird backhanded drag.

The Kings leave the east coast with another two points and come back to Staples Center for a three-game homestand before hitting the road again. It's been a pretty damn good road trip and I can't wait to see the boys in LA!