Share All sharing options for: Utter Ridiculousness & A Solid Showing

On Monday the 16th, the Kings faced the Atlanta Thrashers at Staples Center and it was a wild game. Having the emotional and physical highs and lows with 6 goals for and 6 goals against caused me sheer exhaustion. If I ever wanted to know what it was like to be bipolar, I got a good taste of it. This game was basically a must-win with the worst case scenario being the Kings getting a single point, but when the Thrashers scored the first three goals in the opening 8 minutes, it looked like the Kings were toast. But they came back, but then the Thrasher went ahead, and back and forth and back and forth with broken plays everywhere. Heading into the third period, the Kings were still down a few goals with the shots far in their favor. The goal to tie the game came with only 5 seconds left from Anze Kopitar and caused Staples to erupt.

The overtime was just as exciting and just as dominated by the Kings. After five minutes of stress, the shootout began with Atlanta's Erik Christensen getting the game winner. Once again Jack Johnson got an opportunity in the shootout without scoring. I'm sooooo curious to know why he's getting opportunity after opportunity. The Kings scruffed up one point in this game and looked like they cleaned up a bit for the next game against the Ducks.

Side note: This game was also celebrating Armenian Heritage Night and the arena was in full swing. Zach Bogosian is the first Armenian player in the NHL so the Kings celebrated that fact since there is a very large Armenian population in the Los Angeles area. Here's an interview from the Thrashers website with Bogosian. Also I met up with James Gralin, blogger of the Colorado Avalanche persuasion. He is on a west coast swing of the hockey teams and he went to two Kings games. Go to his blog, Jerseys and Hockey Love, to get an outsider's point of view and take a peek at his pictures! 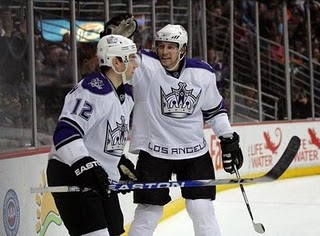 
Tonight's game against the Anaheim Ducks was a different beast altogether. The Kings never trailed in the entire 60 minutes and ended the game without having any brain cramps. Interestingly enough the Kings only tossed 26 shots on Jonas Hiller while Jonathan Quick saw 31, but I kind of see this as the Kings playing a more efficient game, especially compared to that strange game on Monday. Overall the game was a bit boring, but as long as it ended with the Kings grabbing two more points, I could be satisfied. There wasn't too much going on overall, but there was a fight (Wayne Simmonds and Mike Brown) and a scuffle at the end of the game with Quick getting mixed up in it but only because the scrum began with him getting taken down behind the net. 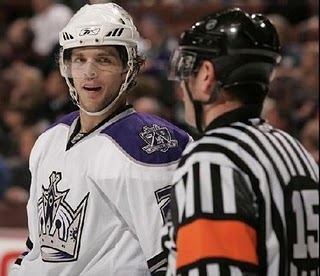 Wow, what a waste of space.


At the end of today the Kings have 59 points (tied with the Minnesota Wild) and are 3 points out of the 8th position. Tomorrow the Kings go into the Shark Tank where the Sharks have been tearing it up. They are 24-2-3 at home, but the Kings have been riding a hot streak on the road. Games against the Sharks are always unpredictable, so this one will definitely be exciting.