Share All sharing options for: What a Road Trip: Kings 3, Devils 1

This Kings continued their east coast swing today and played their fourth game of a five-game road trip. They hadn't played well the last two meetings against the New Jersey Devils, but tonight turned out to be quite different. I think the biggest shock was when the Kings started out the first two shifts hustling their tails off in the offensive zone. I can't remember the last time where the Kings were in the opposition's zone to start off a game. They weren't in there for just one shift, but two! I had a feeling that the game would turn out to be a good one and they didn't disappoint. Jarret Stoll and Anze Kopitar got on the scoreboard and Patrick O'Sullivan followed through on his penalty shot. Overall, I didn't really have any complaints with this game (and I can't say that often). The forwards have really been stepping it up and getting pucks past goalies. They were a lot more controlled in that department tonight than they were in the last game against the Washington Capitals. The Devils only got 26 shots on Quick and the Kings put 32 on Scott Clemmensen.

Once again, Jonathan Quick has been quietly impressive in net. He's been making solid saves and, at the same time, been making the big impressive saves. He's stopping pucks that Jason LaBarbera just couldn't seem to ever stop, which automatically means that Quick isn't on anyone's hit list in the Los Angeles area. He's smart and shifty and I like it. 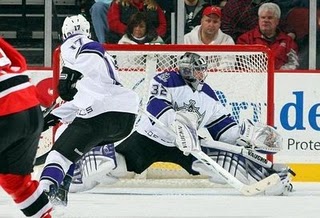 
This game gives the Kings 53 points and places them in 11th place in the Western Conference. The crazy thing is that they're two points out of the 8th seed since the 6th seed all the way to the 13th seed are separated by just five points! I'm not ringing any playoff bells just yet. I don't want that to be focus right now; the Kings need to work on their consistency within individual games. BUT if they come out and play the way they did tonight against the Devils on a more consistent basis, I wouldn't be surprised if they made a solid run at a playoff spot. It's not entirely out of the question, but they could easily crumble, which wouldn't be surprising. I'd definitely be pissed if they started going downhill, but I wouldn't be surprised.