Drafted as a project player, Johnston has shown flashes of brilliance that indicate he could be another late-round gem uncovered by the Red Wings. He’s been able to flourish on a very deep Belleville team, insulated by promising prospects such as Eric Tangradi (PIT) and P.K. Subban (MTL). After finishing his rookie season in the single digits for point production, Johnston exploded offensively, quadrupling his point total to 36 in 58 games." 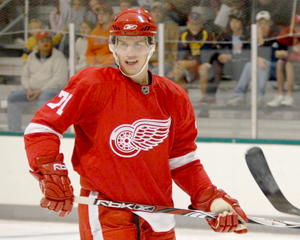