Three experts did mock drafts and evaluations, with the Kings picking as they would if the season ended today (#6 pick). Two of the experts had the Kings picking a defenseman, which I think is unlikely but what the h*** do I know. Here are the three picks:

Matt Duchene, C, Brampton. "Smart, offensively gifted player added to the best collection of young talent in the League [emphasis mine]." "Scary-talented Duchene could be second only to Tavares in innate hockey sense." 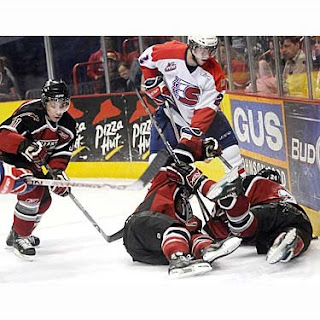 "The second expert has Duchene going at #4 and the Kings taking Jared Cowen, D, Spokane. "One of 2009's most complete prospects joins one of NHL's most exciting young teams." Note: he's talking about the Kings.

The third expert has the Kings passing up Duchene to take Ryan Ellis, D, Windsor. "The most offensively gifted defender in the draft adds more talent to Kings' stable."