Back And Forth: Canucks 4, Kings 2

Share All sharing options for: Back And Forth: Canucks 4, Kings 2

The Kings played the Vancouver Canucks again up in western Canada where the latter came out the victors in this weird game. All six goals came in pairs with the last four occurring in less than five total minutes. Unfortunately the Kings received zero points from the contest but they remain in 13th place with 67 points in the Western Conference.

Special thanks to FSN for not airing the game with Bob Miller and Jim Fox. Listening to the Vancouver commentators was really "awesome." And by "awesome" I mean "painful." It's a good thing I possess the power of filtering out noise. Something else I found (and still find) annoying was that Denis Gauthier had the puck in the defensive zone at one point and started to pass it out when he fell over. That's right, he. Just. Fell. Over. Unbelievable. By the way, do the Kings really need two players on the roster who are only gonna be playing 5 or 6 minutes a night? Raitis Ivanans played 5:38 and Kevin Westgarth played 4:31. Westgarth needs to learn how to skate better and have more offensive upside or else he's probably gonna be in Manchester for a long time. I'm not sure why he's with the Kings right now, but it's not like he's moving from the 4th line anytime soon.

This game might have had the lowest number of hits the Kings have ever had with 11; the Canucks ended with only 9 too. Quite odd and a bit boring too, but I guess it doesn't help when you're being outshot 20-3 in the first period. The Kings spent the entire first period running around trying to get control of the puck, and the second period wasn't any better but at least the Canucks only had 7 shots then. The Kings best period was the 3rd in terms of shots where they got 14 but they were only able to get two goals! 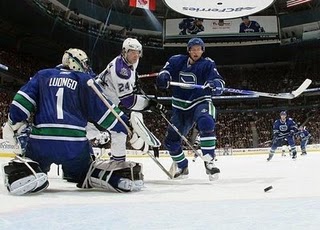 The first goal was the one part I enjoyed about this game; Alexander Frolov absolutely schooled Mats Sundin to score on the backhand. Talk about slick. But the whole game was a bit odd with Vancouver scoring twice in the first and entering the third period with the same score and then having the next two goals belonged to the Kings with Anze Kopitar scoring immediately after Fro scored. With some hope building for the Kings, the Canucks shut it down with two quick ones from Henrik Sedin. Out of the four against Jonathan Quick, two of them were definitely fluky ones. One bounced weirdly behind the net against the boards and Quick was caught out of position; the other was Henrik Sedin killing some time by taking the puck toward Quick on his own. He ended up dipsy doodling in front of Sean O'Donnell and getting the shot off pretty easily.

The end of the game got a bit exciting with Alexander Burrows taking a penalty with just under two minutes to go; the Kings pulled Quick and it was 6-on-4 for the rest of the game. Unfortuately, it was a no-go for the Kings and the Canucks are sitting in the 5th seed. The Kings face the San Jose Sharks tonight where, if they win, they'll STILL be in 13th place. In looking at the standings, I can be happy about one thing: the Ducks are in 12th place. Haha.