Share All sharing options for: Better Than Nothing: Kings 1, Stars 0 (SO)

So I was pretty much unimpressed with this outing against the Dallas Stars. It was a boring first two periods with the Kings getting only 3 shots on net in the first period! BORING. The offense was no where to be found for the longest time and Jonathan Quick once again stood on his head to keep the Kings in the game. By the end of the game they had gotten their act together (a little bit) and kept the Stars to 29 shots (thereabouts) and they had 30 shots themselves. The hits were virtually even as well that came with some casualties.

Raitis Ivanans nudged Trevor Daley into the boards and Jarret Stoll left the ice after a hit involving his knee. Kyrs Barch tried to pick a fight with Ivanans and left the game as well. I'm not sure what the status of Stoll is, but I'm hoping that it won't take him out for the rest of the season. That would hit the Kings roster pretty hard since Alexander Frolov is already out and Patrick O'Sullivan was shipped off to Edmonton. 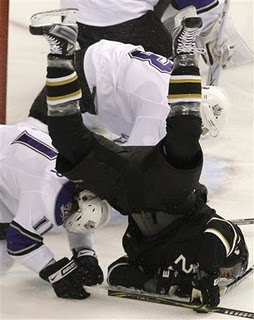 The game eventually ended with little fanfare and I was starting to fall asleep, but the overtime frame woke me up when the Kings decided to wake up too. The pièce de résistance was the shootout. It only took three rounds to end the game and Anze Kopitar was FINALLY in the lineup to take the shot; it feels like he hasn't been in there this whole season. His shot looked very similar to his move last season against the Minnesota Wild where he went one way and his stick and puck went the other. Go Kopi!

Jack Johnson was unimpressive with his low shot, but Justin Williams finally did something. He went five-hole on Marty Turco and it looked like we were going to a 4th round until Turco ended the game. Instead of stopping himself after he held the puck between his legs he slowly slid into the net and his whole body crossed over the goal line. The goal went to review and the game was over. 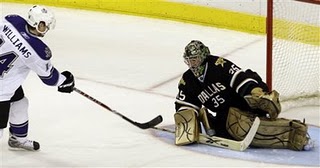