Share All sharing options for: Fantastic Goaltending: Sharks 2, Kings 1 (SO)

After 65 minutes of battling and 7 rounds in the shootout, the Kings were only able to scrap one point from last night's game against the San Jose Sharks. The Kings definitely played better last night than they did against the Vancouver Canucks two nights ago, and Erik Ersberg did not disappoint as he faced 39 shots in all four frames. I was happy to see them working hard to try and get every opportunity going their way.

One particular play that had me spewing profanities at the TV was when Dustin Brown and Anze Kopitar had a 2-0 break after Joe Thornton broke his stick. The two had no one near them and neither took charge to get the shot off. Brownie overskated it and passed to Kopi who ALSO overskated. Unbelievable. To flounder a chance in a game where every single one matters absolutely kills the momentum that you're trying to create. The camera shot of the two players on the bench showed frustration and more frustration. Let's prevent that from happening next time, mmkay? I know it's a split second decision, but one of you just take the freaking shot.

With just 41 seconds into the second period, Wayne Simmonds scored off a rebound on Evgeni Nabokov after some solid passing by all Kings players with Alexander Frolov and Michael Handzus digging in. But the amount of overall penalties taken by the Kings was a bit shocking and I'm wondering if it was sheer desperation in the particular shifts to try and keep up with the Sharks. The Kings took 9 total penalties with one being a fighting major to Raitis Ivanans going against Brad Staubitz (whose name rings no bells for me). In the end, give it to Ivanans. Also golf clap to the entire Kings bench for killing all 8 penalties that saw them a man down. 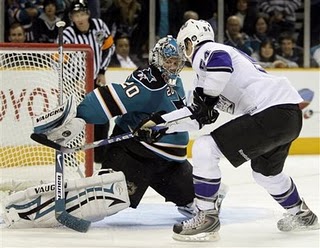 After 60 minutes of uptempo play and 5 minutes of overtime, the teams went to the shootout. I know I shouldn't have been happy with the fact that the Kings were only able to get one point, but hey, it's better than nothing. The seven rounds of the shootout were the crowning moment to this feisty game. The longest the Kings have gone before was 6 rounds in the 07-08 season against the Anaheim Ducks. So the Kings put out Kopitar, Jack Johnson, and Brown as the shooters with only Jack scoring, but they weren't lacking any shooters for all the rounds, but I did question Handzus' presence at the line over Teddy Purcell. I mean, AHL Rookie of the Year versus a solid shutdown centerman? I'm not bagging on anyone here, especially since neither player scored. In the end Jonathan Cheechoo scored the game winner and the Sharks got their points.

It appears that the Kings just can't budge from the 13th spot in the West. The St. Louis Blues and Anaheim Ducks both sit at 70 points and the Minnesota Wild are right ahead at 72. The Kings could feasibly get back up there. If they keep playing the way they did last night, this season will definitely end 100 times better than a year ago.