Share All sharing options for: Never Would Have Guessed: Kings 3, Bruins 2 (OT)

Let's just hypothetically say the Kings somehow make the playoffs. You know how they'd do? Bounced in the first round, no doubt. Maybe they'd win a game or two, but it's clear they're not ready to be in the playoffs this season. Saying that, I'm still not completely counting them out. For some reason, I just can't for probably another week. This road trip that sees the Kings in Pittsburgh tonight, Chicago, St. Louis, Dallas, and Nashville is the make or break point. The reason I say they'd be out in the first round is that the past two games made it perfectly clear they're not ready. Two games ago, they played the Nashville Predators (a bubble team in the West) and they couldn't pull out the win. Last night they played the Boston Bruins where they were up and down and all over the place in terms of passing, shooting, and teamwork in general. They managed to get the win in overtime (3-2), but wow, it was a shaky game for the Kings.

Amazingly enough the Kings had 38 shots on net while the Bruins only had 26. I don't know how; I watched the entire game and the flow felt like the Bruins had control of the first period and almost entire second period. Both of their goals happened in the blink of an eye. Combine the Kings being out of position and the Bruins landing passes and you get two goals against. I was also surprised that the Kings were able to keep up with the Bruins in the hits column getting 28 and 27, respectively. Also surprisingly, Dustin Brown only had one hit, but he had the game winner in over time, which had me jumping out of my chair, as per usual. Another seat-jumping goal was from Drew Doughty. He made an aggressive move toward the front of the net after leading the charge into the Bruins' zone and the puck found the back of the net off of his stick. It was a great effort and finish to regulation. I honestly thought the game was over with 5 minutes left, but with less than two minutes to go was when Doughty scored (and where my faith was renewed). 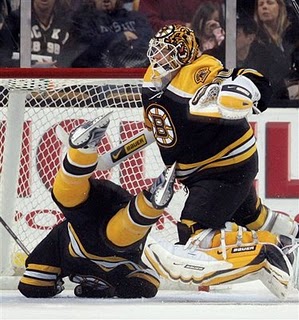 
Going back to the bottom of the roster, I thought Raitis Ivanans got an unusual amount of minutes (9:26) but then the guy takes two penalties back-to-back! What's up with that? Once again Kevin Westgarth isn't doing anything. And I realized that there's someone on the team who is a worse skater than Westgarth! Denis Gauthier! He's a horrible skater. He looks like he has lead in his skates with each stride; I'm not sure why it was so apparent last night as opposed to every other game this season, but he's slow and lumbering. Waive him and get him to Manchester.

Alexander Frolov was in the doghouse for this game getting only 12:01 of ice time and ending the night at a -2. Definitely a bit harsh and it's hard to do well when you're on the 4th line, but you can't question the coach. Perhaps Fro will be back in the low 20 minutes for tonight's game against the Pittsburgh Penguins. In either case, I'm not worried about him. He's got the most goals on the team and the expectations are pretty high for him. Go Fro!

I used to go into games having a feeling in my gut of whether the Kings were going to win or lose, but I've been unsure for the past two weeks or so, which is how I'm going to be for the rest of the season. I'm not shutting the season down just yet, give me a week... or so... and I'll let you know where I stand...