The Kings faced the Vancouver Canucks last night in a pretty damned important game. The Canucks are sitting in 5th place in the Western Conference while the Kings are in 13th and still out by just a bit. This game brought them up two points and (as of today) are sitting just three points out of the 8th spot.

This game started out and continued to be a solid game for the Kings, not to mention exciting; that is, until the Canucks scored their first goal, which was just about the time Denis Gauthier thought it convenient to take a penalty on the next shift. Someone get that guy some glasses or something. So Matt Greene. He's pretty studly, I must say. But not in the "I think he's smoking hot" type of way; I mean more of the "you just blocked that puck with your goddamned face!!!!" And Jarret Stoll. What a game! He was in all the right places. For instance, his first goal was on the PP and Teddy Purcell found the open seam and Stolli snuck right up to slam home the perfect pass. After another goal, Stolli was named First Star of the game. AND RIGHTLY SO.

Jason LaBarbera was sitting on the bench for this game but Roberto Luongo wasn't looking that great. The first two Kings goals came within the first 10 shots of the game and, actually, both teams only had 22 shots on net. For being an exciting game with a lot of fast-moving flow, the shots on and against were definitely lower than usual. Anyway, just a short game recap for your reading pleasure. 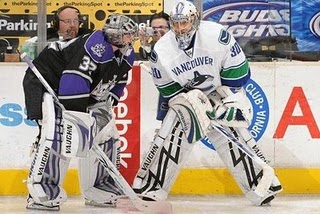