With just a few seconds left in a game that you're winning, is it really necessary to take a shot to someone's head? Well, Evgeni Malkin thought it was. He gave the cold shoulder to Wayne Simmonds and the whistle blew to end the game. I'm not even upset about the loss. Who gives a shit when someone's head is involved? Who cares if it's the league superstar hitting a rookie's head? In this case, every single Kings fan whereas every Pittsburgh fan probably cheered the hit. But let's talk about questionable acts of unsportsmanlike conduct from the past few days (of which I'm only discussing two because I'm feeling a bit lazy).

(1) Alexander Ovechkin's celebration after he scored his 50th goal of the season. I've read many reactions both for and against. I'm on the fence since he is who he is. He loves to celebrate his teammates' goals as well as his own, but this definitely involved a bit of showboating. He received a talking to by Bruce Boudreau and everyone moves on. Don Cherry's going to have a field day with this one.

(2) Penguins' Malkin laying a hit on Kings' Simmonds with just a few seconds left in a game that the Penguins were going to win. As with Ovechkin, there have been many comments going around about this hit both for and against. Comments like "Get your head up, rookie!" But wait a second, did this person not see that all Simmonds was trying to do was poke the puck away from Malkin? He wasn't going to him to with the intention of hitting him.

Earlier in the game he and Jack Johnson toughed it out in front of the Kings net for a good chunk of time where both players received 2-minutes for roughing. This altercation is a part of the game, but anyone who says that hitting someone else in the head is "a part of hockey" has never had someone on their own team taken a hit to the head. It's not about being an objective observer of every team when you have your specific team that you love; it's about the passion that every single fan brings to the NHL, which is why there will always be cheers and jeers in every situation. 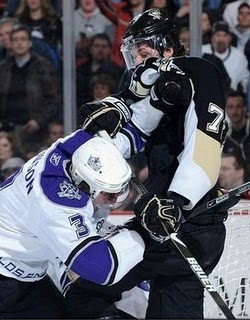 
In the end, there are going to be comments all over the place with a questionable play such as this one from fans from every region across the US and Canada. But the plain facts are that (1) Simmonds' head was down in going for the poke check while (2) Malkin was defending himself by bracing for some kind of hit that was never going to come. In the end his shoulder goes straight into Simmonds' head. I think the argument of whether he was hit with the shoulder or elbow (legal or illegal) is not the point. The point is that the brunt of the hit was into Simmonds' head.

Malkin is subject to a disciplinary phone call where the resulting decision is to be announced tomorrow. Am I excepting a suspension? Hell no, who has the guts to suspend Malkin? Every situation is unique but I'm not expecting a fair trial here. Everyone has a hard-on for Malkin and the Penguins, so why should anyone care about Simmonds? I'm not saying I don't think the guy deserves punishment; I definitely think he deserves some sort of supplemental discipline. I just don't think the NHL is going to do anything about it considering who both players are. 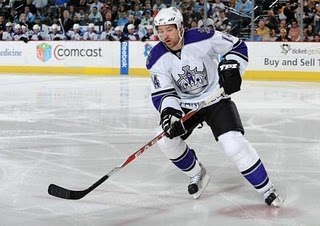 Oh yeah, the game. Just some quick notes on an unimpressive outing:
(x-posted to HLOG)