Next year, the Kopitar and Greene contracts kick in; Williams' cap hit is a bit higher than O'Sullivan's this season; we will likely sign JJ for around $3MM $2.5MM $2.25MM (I'm going for O'Sullivan-ish numbers, with a little discount because Johnson hasn't quite achieved at even POS's level yet - as with POS, his contract will be about potential); Purcell will get a nominal (i.e. probably infinitesimal) raise. Letting Calder, Gauthier and Armstrong go, buying out Preissing, we will have a cap hit of $44.688MM $43.938MM, with four roster spots to fill (2 forwards and 2 defensemen).

Assume that one of the D is a prospect (one of Hickey or Voynov, for example, or maybe Drewiske). If it's Drewiske, he would be a cap hit of .525. If it's Hickey, assume a Doughty-ish contract with a similar bonus structure, cap hit plus bonus of around $2.5MM (my best uninformed guess - Hickey has signed a contract but figures haven't been quoted yet; if you wanted to assume the most Hickey's contract would be, not the least as I tried to do above, plug in the Doughty numbers), add $1.348 (per Rich Hammond). If it's Voynov, he gets probably somewhere around .700 (again, pulling a number more or less out of my hat -- if you want to assume maximum entry level, add $200K). I would say that DL has to leave room for Hickey to make the team in the fall. He can't go into camp with a cap figure such that if Hickey makes it he has to trade someone away to stay under the cap (the penalty for going over the cap due to bonuses is to have the overage tacked onto next season's cap total -- with the cap already thought to be coming down in 2010, DL can't afford to have the Kings cap come down even farther...of course, that's only an issue if he's thinking of jumping into the UFA market or otherwise approaching the cap ceiling this summer; if not, it's moot). So I think we have to plug in the Hickey number. For the other D, I would assume it's either a prospect or a cheap UFA (like SOD was this year). I'm going to guess it's a UFA at what SOD got last year: $1.25MM. So that's an additional $3.75MM $2.598MM. But could be done with Voynov and Drewiske (no UFA veteran, no Hickey) for 1.25ish (a savings of $1.36MM).

[UPDATE: DL, in 3/30/09's 'teleconference call' with ticket holders, mentioned Drewiske among the solid Kings d core, i.e. Doughty, Johnson, Quincey, Greene, Drewiske. This makes me think Drewiske's stock is way up and he might well take the place of a vet UFA d-man on next year's roster. I'm not going to change the numbers quoted below, but know that you can subtract 700K from everything that follows for the Drewiske/Hickey option.]

More than two if you're getting rid of Zeiler or Ivanans. Since both those guys are affordable, I'm going to assume that they either stick around or are replaced by like-priced players (e.g. Clune, Cliche). 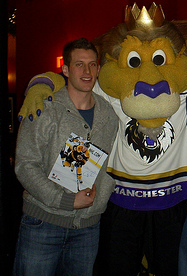 As for the two spots to fill, I'm going to say one goes to a prospect. I pick Trevor Lewis. Could be Boyle. Doesn't matter. The cap hit would be .855 for Lewis. Will Boyle re-sign and get a raise? He's at .835 now. I don't see him getting more than $1MM. So let's be conservative, and call it .855 (the Lewis figure). [UPDATE: in the conference call with ticket holders, DL went out of his way to mention that his RFAs Johnson and Boyle will be matched (if someone throws an offer sheet at them); this suggests more faith in Boyle than many of us imagined; also, why didn't he mention Purcell, also an RFA? Well, maybe it was just a slip; he does talk fast. In any case, we now have to factor in that maybe Boyle will get a real raise in a new deal. Again, I will not adjust the numbers below, but you can all mentally tack on a couple hundred thousand dollars.]

If the last spot is a prospect, too, then the cap hit will be at almost exactly $48MM. [UPDATE: a little less if it's Drewiske and not a UFA D-man; but a little more if Boyle gets more of a raise than we previously thought; so $48MM is still a good, safe bet; if you want a range, call it $47.3-48.5MM.]

But if it's a UFA? Hossa? How much? $8MM? Okay, now we're $55.39MM, a couple of bucks from the cap ceiling. Maybe you get Hossa for a little less than $8MM (doubt it though), or maybe we go with a cheaper defense (no Hickey, no UFA d, etc.). Or maybe we shed some salary somewhere else. But where? Who are you going to deal? Handzus, Frolov, for picks? For a cheaper forward and a prospect? That could happen, I guess. Maybe the cap goes up a few dollars and that gives DL more room (temporarily, because everyone seems to think the cap is coming down the following year).

Or maybe it's Gaborik (not my choice) and it's less than $8MM. But you have to be careful, because if the point is to get a top-line sniper/finisher, you don't want to buy damaged goods, or the budget version of what you really want. Because the budget version is likely to be similar to what we have already, and that defeats the purpose of spending our way up to the cap ceiling in the first place. It's only worth it if you get yourself a 40-50 goal scoring machine.

Plan B could be some kind of Kovalchuk for Frolov (plus, for example, Handzus, Johnson, Hickey and a 1st) swap. Two guys in the last year of their contracts, etc.. Would that be a good trade? Well, it's obviously an upgrade on sniper-power. But trading away the future...I wouldn't do it. And Atlanta ain't going to do it for Frolov and Johnson by themselves, or whatever spare parts Kings fans might fantasize about (e.g. the Calder, Preissing, Armstrong, Ersberg, Gauthier, Darryl Evans and a 1st for Kovalchuk rumors of the past season). So I would pass on that one. Probably, I would.

But the overriding point -- the thing I keep relearning every time I crunch the numbers (to the best of my limited ability as a fan) -- is that "tons of cap space" can quickly become "over the cap" with just one signing. Everyone who is saying let's sign Bouwmeester or whatever, keep that in mind. Even the Kings, with a relatively low cap figure compared to everyone else, can't afford more than one big guy. So it stands to reason we ought to think really hard about who that one guy is. There is no, "if we had Bouwmeester and Kovalchuk and Luongo we would be contenders." No team can afford three pieces like that. Those days are over.

But, more importantly, why is Kovalchuk in a kilt? 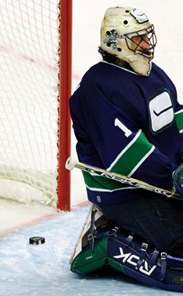