LA Times: Kings are Getting to Know Evander Kane (and May Think He Pitches for the Angels)

Share All sharing options for: LA Times: Kings are Getting to Know Evander Kane (and May Think He Pitches for the Angels)

The Kings, who draft fifth in what is considered a relatively deep pool of talent, have talked several times with Evander Kane of the Western Hockey League's Vancouver Giants. Kane a 6-foot-1 center, had 48 goals and 96 points in 61 games last season and has won raves for his scoring instincts and willingness to venture into the corners.

Kane said he spoke with Kings General Manager Dean Lombardi "quite a bit" during the recent NHL combine, which assembled draft prospects in Toronto for physical and psychological testing. Kane said he thought their conversations went well and allowed each side to get to know the other.

"It would definitely be a great place to go and a real good place to play," he said. "They have a good, young team and they continue to get better every year. I think they're going to be pushing for the Stanley Cup in the near future so it would be a great environment to play in."

Kane, a Vancouver native, said he has visited Los Angeles only once, as a tourist. "It seems like a real good city and the L.A. Kings are a real good organization," he said. "I think it would be a great place to play, for sure.

"I think they have a real deep interest in myself, as do I with their team. It seems like from what we've talked about it would be a real good situation and a real good fit. I think next year they're going to be a real good young team and pushing to make the playoffs for sure."

Lombardi said he had scheduled a visit with Kane's family and the families of several other prospects. He also said 6-foot-5 defenseman Jared Cowan of Spokane of the Western Hockey League is "in the mix" for being chosen with that pick.

via Kings are getting to know Evander Kane - Los Angeles Times.

Two things: (1) I would be shocked if Kane is still available when the Kings pick. (2) The LA Times article says this is Evander Kane [pic at right]. 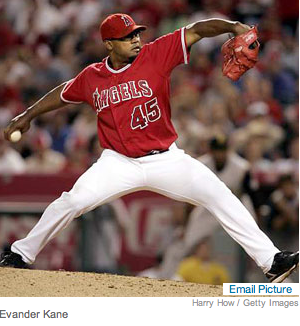 I assume they'll fix it eventually, so I captured it for you/me. Obviously this is not Kane, but Angels' pitcher Kelvim Escobar. [UPDATE: They fixed it.]