Share All sharing options for: Who's Vulnerable? Who's Not? (a.k.a. Cap Idiots Chart #1) 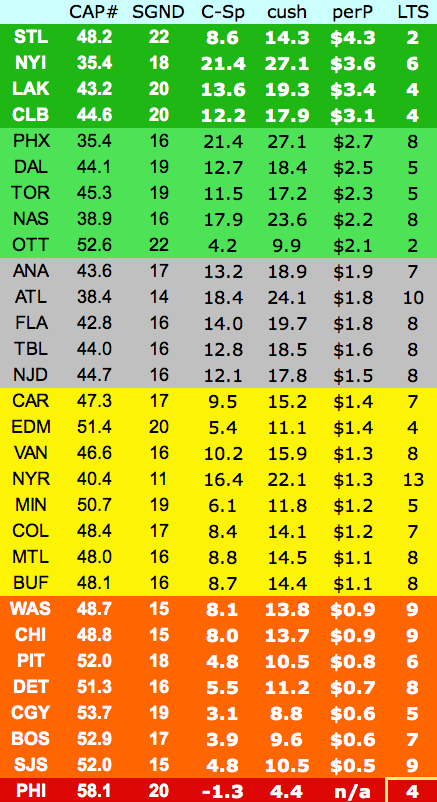 [UPDATE: the most current version of the chart, as of 7/9, is here] I'm just starting to run some numbers related to the cap hits for all the teams. What I wanted to see is basically this: who has the least cap space? Who has the most players to sign? And who has THE MOST AND LEAST TO SPEND PER PLAYER THEY NEED TO SIGN? This last is my way of looking at who is going to have to dump salary and who is in a position to pick up that salary.

Here's what my incredibly primitive number crunching tells me:

There are nine teams that have the room to take on a big salary without giving salary back. Of those nine, the four who are in an especially good position are: the Blues, the Isles, the Kings and the Blue Jackets.

In the light-green zone, Phoenix is ham-strung by bankruptcy (for the time being) and Ottawa is immobilized until it takes care of the Heatley nightmare.

Meanwhile, in Salary Dump Land (indicated by orange and red), there are eight teams who are up against the cap and will have to populate this year's roster with a huge number of entry level contracts. What's extra delightful about that is these teams are also among the worst ranked teams in terms of prospects, per Hockey's Future, so where they are going to get these entry-level players is ... (1) either from their depleted prospect ranks, or (2) from the teams at the top of the list, the Kings, the Blues, etc.. The teams with all the tasty prospects.

The other thing I notice about this list is that there are eight motivated sellers and seven healthy, available buyers. The other potential buyers are ones who -- if they buy -- will put themselves in a dangerous position, either of become one of the citizens of the red and orange zones, or of being caught with their pants down with the cap drops several million next June.

So I come back to: seven buyers, eight sellers.

Last point: one of the four advantaged buyers is Columbus. They are currently looking at UFA Nash contract hell. So their ability to buy at this point is compromised. Because, as of this morning's "Nash not happy with Columbus offer" headlines, Nash is in play.

When I next have free time, I will try to put together a list of which players on the orange and red teams are good candidates for dumping.

[UPDATE: funny that the Kings signed Scuderi to a $3.4MM cap hit, which is -- per the chart on the right -- exactly their "perP" available amount; therefore, mentally adjust the players signed number to 21; the Kings position in the chart stays the same]