Share All sharing options for: UPDATED Who's Vulnerable? (a.k.a. Cap Idiots Chart #2) 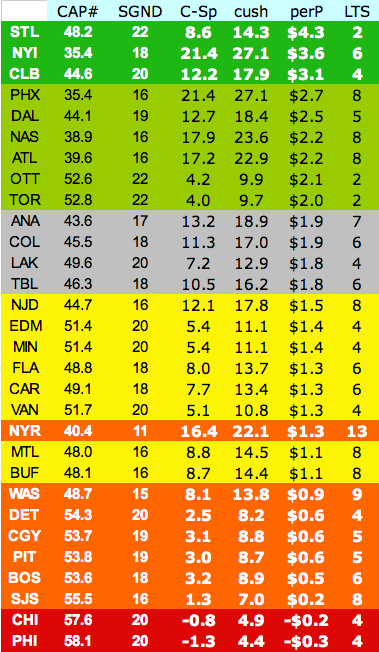 [UPDATE TO THE UPDATE: if you navigated here from a link not on this site, go instead to the corrected, updated chart here]

Just a few quick observations before sleep. Since last time, the Kings and Colorado were big movers. The Kings dropped into the gray zone. Colorado went from bad to gray. With the Kings dropping down, the number of buyers is reduced by one.

Meanwhile, in the orange and red zones, everyone's making their situations worse by varying degrees. Well, not everyone; Washington and Pittsburgh are standing pat. San Jose has shrunk its wiggle room down to unworkable levels. And Chicago has joined Philly in the joyous red zone.

For the hell of it, I granted the Rangers honorary orange status, because any team that must average $1.3MM per player and has THIRTEEN players left to sign, is screwed even though it's not Chicago or Philly screwed yet. They'll get there.