Share All sharing options for: CAP IDIOTS CHART #4 UPDATE -- in which it turns out I am the idiot

...because I somehow only just realized that the active roster maximum is 23 now, not 24. It was 24 for most of my life, so I didn’t notice the last four years of 23, especially since the Kings have never been near enough the cap ceiling for me to pay attention to it. That's my excuse anyway. I’ve adjusted the chart accordingly. Secondly, there is indeed a 20 player minimum for the active roster. This, of course, means that a team can spend to the cap on only 20 contracts, if it so chooses. By keeping 20 players instead of 23 on the active roster, you can obviously squeeze a little more out of the cap ($2.84MM as opposed to $2.47MM per player on average).

So, in theory, you can have an active roster of 20 Fedor Tyutins instead of 23 Brent Sopels. If that's your idea of a good time. 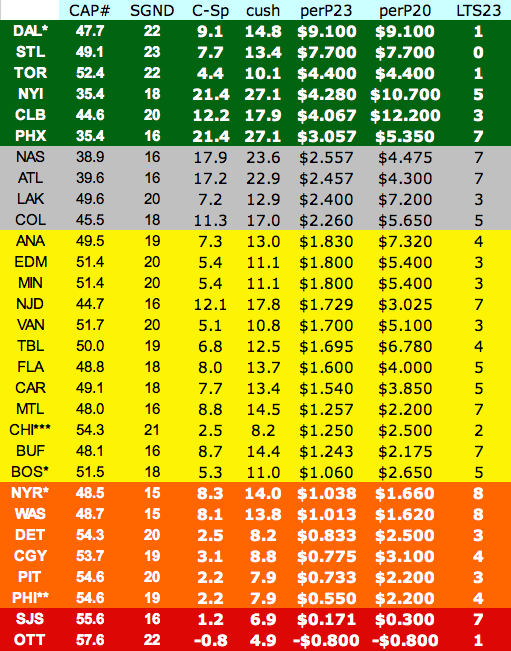 However, the potential for disaster is high, since any injury would leave the team short-handed until the injured player can be put on LTIR, and even then the injured player wouldn’t be allowed to come off LTIR until cap space had been cleared. Depending on the waiver-exempt status of the replacement player, this can have undesirable consequences. The Calgary situation at the end of last year, where they couldn’t dress a full bench, is a good example of this.

Nevertheless, I decided to add a new column to the chart, one which calculates the amount of cap space available per player if the reckless madman GM decides to go for the 20 man roster. If the team has already signed 20 or more players, the number in this column equals the remaining cap space.

For example, San Jose, who would only have $171K per player if they had to sign seven players, now can feel free to spend up to $300K for each of the four players they need to sign to get to 20.

I'm still generously subtracting Chicago and Boston's bonus cushion from their cap hit, since they are the two teams who may be inclined to tempt fate and spend their cushion.

cush = the 10% off-season cushion (NOT the bonus cushion)

LTS23 = number of players left to sign to get to a 23 man roster. Subtract 3 in your own head for the other figure.