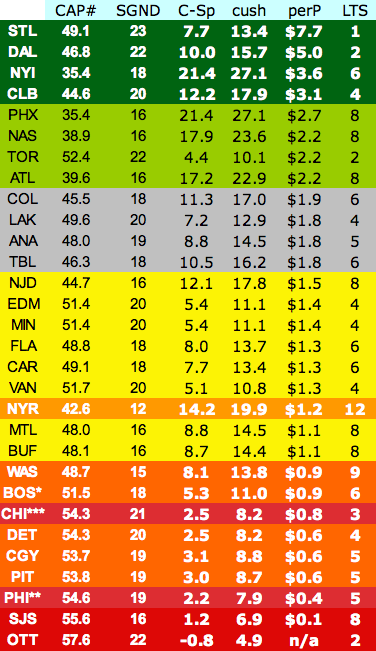 [UPDATE: the latest chart is here. But don't let that stop you from reading all of this nonsense.]

On the last chart I screwed up the Philly numbers, as I took the totals from the nhlnumbers cap hit chart without noticing that the site nonsensically included LTIR figures in the cap hit. This especially makes no sense for a player that is retired. I got some flak from this vis-a-vis Philly fans who wanted to make sure I understood that they were NOT one million over the cap with four players left to sign, but were in fact two million under the cap with five players left to sign.

But it does make Philly's situation marginally less horrible, since they don't necessarily have to dump one of the big salaries. If they are happy pushing their noses right up against the cap ceiling, they can dump one of the two players they have under contract who isn't one of the big boys but still has a contract big enough to help them squeeze under the ceiling. These two contracts belong to Carle and Jones.

Having corrected this LTIR error, I decided to make a couple of adjustments to the chart, anticipating that, for example, Chicago fans might complain that they have a huge bonus cushion (the biggest in the league) and therefore have $3.8MM more cap space than my chart shows. The bonus cushion allows teams to go over the cap up to the cushion amount in order to pay bonuses, but if they do so, the overage comes out of the next season's cap ceiling. Since Chicago is in full-scale apocalypse mode next summer, with its big RFA clusterf***, I highly doubt they are going to want to make their situation exponentially worse by lowering their cap another $3.8MM. Of course, they could also just make the insane assumption that Kane will not earn his bonus, in a contract year no less. No rational GM would use his bonus cushion in such a reckless manner. But since I said Chicago would not be stupid enough to sign Hossa and put the Kane and Toews RFA contracts in jeopardy, I have to leave open the option that they are stupid enough to spend their bonus cushion this season. Accordingly, three asterisks (***) next to Chicago's name and I have subtracted their bonus cushion from their cap hit. They get a soft-red designation because that's where they belong. I also subtracted Boston's bonus cushion from their cap hit, because they are the only team in cap trouble who has a significant bonus cushion.

Ottawa has jumped to the front of the idiot line by signing Kovalev. Anaheim jumped into the gray by signing Koivu. Detroit hasn't signed anybody, but their cap situation improved markedly due to Hudler's defection. Obviously, no Hudler is bad for Detroit, but it's good for their cap figure.

Bottom line: you've still got 6-8 motivated sellers, and (being really generous) something like 8-10 teams who can comfortably take on salary. Considering that two of those teams, Dallas and Phoenix, are in serious financial trouble, I think it's more like three really comfortable buyers, and maybe five more who can do it but it will cause some pain.

I wonder who will blink first.