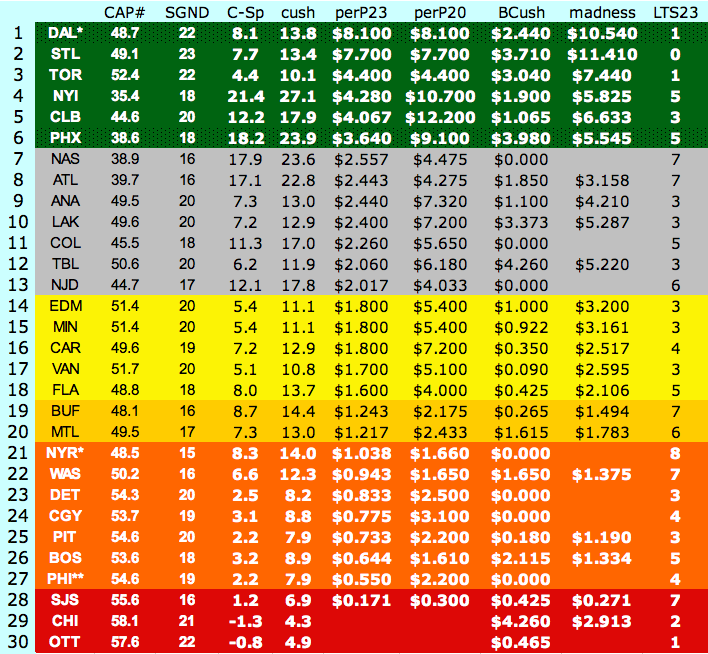 Okay, I updated the numbers through Friday evening, but more importantly I pulled out the bonus cushion numbers and dedicated a column to the crackpot notion that some GM is going to consider dipping into his bonus cushion in order to pay for his extravagance. To reiterate the rules related to the bonus cushion: (1) teams have to add their potential bonuses into their cap figure; (2) however, teams are allowed to go over the cap by the amount of their total potential bonuses (a.k.a. "the bonus cushion"), provided that they get back down below the cap before some specific date, which I believe is the last day of the regular season; (3) if the players don't earn their bonuses, the un-earned portion is subtracted from the cap; (4) if the bonuses are earned, teams must get under the cap by whatever means necessary (e.g. dump salary, send someone to the minors, etc.).

Some people are wondering if Tallon is going to dip into his bonus cushion this season in order to keep his team going. After all, what are the odds that KANE AND TOEWS are going to earn their bonuses?

Accordingly, the new column is called MADNESS. The figure in the madness column represents a team's cap space per player remaining to be signed, assuming you raise the cap ceiling by the amount of the team's bonus cushion and assuming you're shooting for a roster of 22.

Why did I choose 22? Here's my reasoning: A GM that is willing to fritter away his cushion is not also going to be carrying a roster of maximum size. I am making the assumption (or guess) that he will have already "saved" by going for the 22-man roster. Of course, he could "save" further by cutting the roster down to 21 or even 20, but I don't think there's a GM on the planet who's that crazy. So blowing the bonus cushion on a roster of 22 is the most crazy I was willing to imagine anyone reasonably being with another millionaire's money. If you think someone might try to go down to 20, feel free to run your own numbers. (Or wait for me to get bored and do it, probably later tonight.)

cush = the off-season cushion (teams are allowed to go over 10% but they must be down to the cap by the time the season starts -- or maybe it's the day before; ask Brian Burke).

perP23 = cap space per player remaining to be signed, to populate a 23-man roster.

madness = cap space per player remaining to be signed, to populate a 22-man roster, while recklessly eating up your bonus cushion.

Some other things to mention:

I decorated Dallas and Phoenix with little dots to indicate that, while they live in the green zone, they are reputedly cash poor or otherwise hobbled and therefore might not be in the market to pick up another team's salary dump.

I added an orangey-yellow color to indicate the two teams who would be nice and yellow were it not for the fact that they have an awfully high number of players to sign.

Note that Chicago is over the cap but they still have room to spend if they flirt with MADNESS.